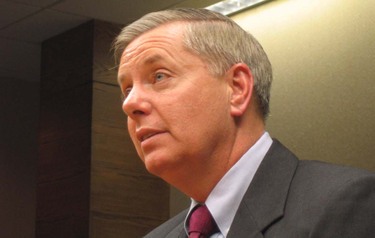 Sen. Lindsey Graham made headlines today by rather dramatically breaking with his friend and fellow Republican Mark Sanford. Far from having a "list" of Republican lawmakers he’d like to get rid of, Sen. Graham gave a thumbs-up to the whole GOP field of officeholders in South Carolina.

So when he came by today to talk about Iraq, Iran, Europe and nuclear proliferation, before he left we inevitably got into S.C. politics, starting with a question from reporter John O’Connor about to what extent Mark Sanford is actually a veep contender.

Mr. Graham was careful only to say positive things about the governor, he did say something about himself that drew a contrast between the two of them. He said he was backing Republicans, regardless of whether he agreed with them totally or not, is because "I’m a party leader." Which of course suggests that certain other people are not, but he wasn’t going to say so.

He was much more forceful and articulate when talking geopolitics, of course. I plan to go back through the more substantive parts of the interview and see if I can can pull out a clip or two from those parts later. For now, I thought I’d share the part that dealt with today’s news story.