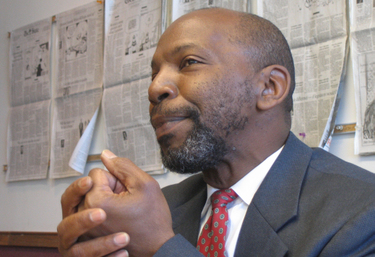 9:45 a.m. — Benjamin Byrd is the second candidate we’ve spoken to who is seeking the seat being vacated by Rep. John Scott. The first was D.J. Carson; the third Democrat, Richland County councilman Joe McEachern, will come in next week. Mr. Byrd is retired after three decades with the state Department of Transportation, where he helped start the minority business enterprise program, before becoming the freedom of information officers in the agency’s legal department.

Mr. Byrd is a soft-spoken man who does not boast — for instance, when he said he was running on the basis of his "experience" and Cindi asked about those experiences, he did not mention that he had served on the Richland County planning commission. What he did mention was his time at DOT, but also his involvement as a parent when his two children were going through public schools — both with PTA and the school improvement council.

While recognizing that the Legislature’s primary responsibility is to pass laws, he is very interested in providing constituent service, and would want to exercise leadership in the community beyond legislation — for instance, he would work to encourage district churches to get more involved in education, through after-school activities, mentoring and homework centers.

His response to the private school "choice" movement is that we "need to make sure all of our schools are financed or operated to where there’s no need to be talking about school choice," because none of the public schools would be inadequate.

While he didn’t use the term, when asked about taxation he asserted the need for considering the system comprehensively, rather than reacting to this or that tax piecemeal. One change he mentioned specifically: "When you buy a car, you enjoy" paying no more than $300 tax, "but that’s not realistic."