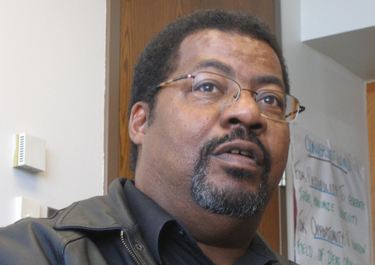 1:30 p.m. — Stanley Robinson,
who is retired from the Air Force, is opposing incumbent Jimmy Bales in
the Democratic Primary. He has no particular criticism of Mr. Bales’
stewardship of the seat, but he thought this would be a good year —
"an exciting year, an historical year" — to try to get into politics.

He readily acknowledges that he is "a rookie," but figures he ended up
doing well at other things he’d never tried before, such as when he got
married 36 years ago, and the first time he was ever stationed overseas
— daunting, but not insurmountable.

He’s interested in improving
access to health insurance. "The patients seem to think the doctors are
getting rich, but they’re not," he says from his experience the last
few years working in the health insurance industry.

He wants to improve
public education, particularly in the distressed areas in the Pee Dee.
He sees early childhood education as key.

While he is a Democrat, he’s
"just as conservative as anyone else," and believes that "picking up
litter isn’t partisan… people are people."