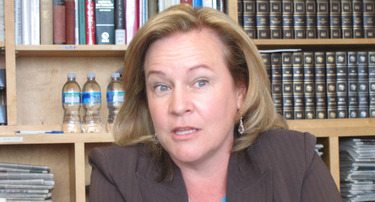 Although she was a candidate for the GOP nomination for this seat two years ago, this is the first video I’ve posted of Ms. Few — in fact, I don’t think I shot pictures of her either, since I didn’t post any at the time. She was the second candidate to come in for an interview in 2006, and it apparently had not yet dawned on me to take my camera into those meetings for blog purposes.

This time around, I have an embarrassment of riches — so many images and clips on candidates that they keep threatening to crash my laptop. And yet, they’ve been coming in so fast I haven’t had time to post many on the blog. But at least I’m doing this one. (Truth be told, if I weren’t under the gun to produce a video clip of something for the Saturday Opinion Extra by midnight, I wouldn’t be doing this one, either — it’s been a tough week, and hours to go before I sleep.)

In this clip, Ms. Few is talking about her proven ability to raise money, which she suggests (and she’s probably right) is considerably greater than that of her two opponents, David Herndon and Tony Lamm.

Up to now, contributions to her campaigns has been a source of controversy, since she attracts a considerable amount from out-of-state sources pushing private school "choice." But she says Republicans should consider that the party is in danger of losing the seat currently held by Bill Cotty, and that the likely Democratic nominee — Anton Gunn, who played a key role in the Barack Obama campaign in South Carolina — might be able to raise some out-of-state money of his own.