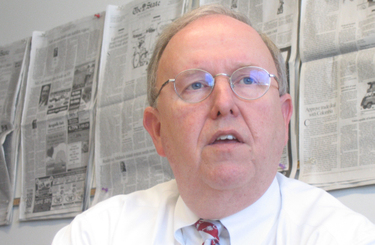 Mayor Bob came by the office this morning to try to sell us on his proposed ordinance to require security measures at apartment complexes. We talked for about 45 minutes. As you know, we have criticized the city in the past for trying to get the federal government to do the city’s job with regard to crime in poor North Columbia neighborhoods. Here’s what we said March 9:

THE STATE
POLICE OBLIGATED TO PROTECT ALL CITY NEIGHBORHOODS
Published on: 03/09/2008
Section: EDITORIAL
Edition: FINAL
Page: A22
IT MAKES GOOD sense for the owner of troubled Gable Oaks apartments to beef up security, but that doesn’t relieve Columbia police of their duty to adequately patrol and enforce the law at the omplex.
City officials seem to believe it’s largely up to the owner of the apartment complex to provide what amounts to basic police protection.
They say the onus is on Transom Development, a subsidiary of Atlanta-based SunTrust Banks, to ensure residents’ safety. Some council members want the federal government to require — and help pay for — security at apartment complexes, such as Gable Oaks, that accept federal housing vouchers. Last week, some S.C. House members got into they act by filing legislation that would offer income tax credits in exchange for providing security at low-income, multifamily housing complexes.
Considering the fact that three people have been killed in or near Gable Oaks since December, it’s understandable that residents and city officials are very concerned. It’s perfectly appropriate for Transom to do all it can to provide extra security for its residents. And it should pay for that higher level of service. Transom plans to do just that; it has agreed to hire security guards and to issue residents parking decals.
But make no mistake about it, the primary responsibility for protecting residents of Gable Oaks or any other part of the city lies with the city. Gable Oaks is in the city limits, and its tenants are city residents. City residents should be able to expect a certain level and quality of service from the police department.
We can’t help but believe that if there was a spike in crime in Shandon or Wales Garden — no matter how minor — the city would aggressively patrol the area, get matters under control and pay more attention going forward. Gable Oaks deserves no less.
But the tone and tack city officials have used when discussing Gable Oaks make it seem as if residents are on their own if the owner doesn’t provide maximum protection. That would be unfair and discriminatory.
While Gable Oaks is in the spotlight, north Columbia residents have taken this opportunity to express concern that the city neglects their area of town. During a meeting last Monday night, about 50 residents complained of poor police presence, indifferent landlords and a City Council focused more on downtown than north Columbia. There’s no doubt that over the years, the city has paid inadequate attention to certain areas of town, and north Columbia is one of them.
While city officials say the owner should police Gable Oaks, some acknowledge that tenants from the complex aren’t necessarily the troublemakers. Visitors and people passing through cause some of the problems. That means those people are passing through — or even coming from — other city neighborhoods. And it’s the city’s responsibility to police all its neighborhoods and ensure people’s safety.
By all means, Gable Oaks’ owner should improve security. But city police shouldn’t take that as a sign they don’t have to be vigilant in policing the area.
Ultimately, the quality of law enforcement residents in Gable Oaks, or other parts of Columbia, receive will be determined by how committed the city is to help make it safe.

Here are some of the main points that the mayor made to us this morning:

Near as I can recall, those were his main points. Maybe I’ll post video from the interview on Saturday Extra this week. (In fact, I’m sure I will unless something better comes up.)

Oh, and by the way — the mayor shrugged off the friction between him and Kirkman Finlay III (below, from a previous edit board meeting) over the issue. When Warren kidded him that "I thought you were about to rip your tie off," from Adam Beam’s report this a.m. "No," said the mayor, "we were hugging and kissing by the time the day was over." 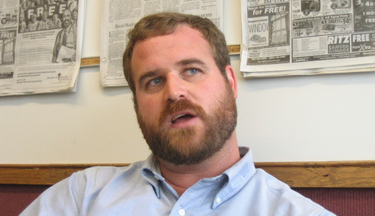