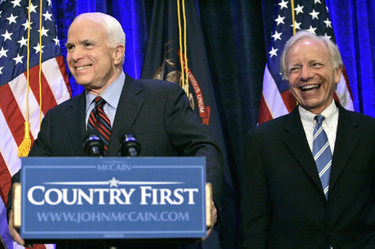 Let me admit straight up that that headline wasn’t my idea. It’s lifted straight from a Wall Street Journal editorial today, which chides both left and right — especially the right — for their antagonism toward my man Joe.

The specific occasion is the chatter about Lieberman as running mate for John McCain. While justly dismissing the hysterical reaction such talk generates on the right, the WSJ agrees with me that veep candidate would not be the best role for the independent from Connecticut. More coincidentally, the newspaper suggests a role that I had been thinking of in connection with Mr. Lieberman not an hour before I read the editorial:

Our own view is that Mr. Lieberman would make a fine Secretary of
State, and that, given the political risks, making him vice president
would probably be too great an election gamble. But Mr. Lieberman’s
national security credentials are first-rate…

Good thought, there. Perhaps Mr. McCain should talk it up.