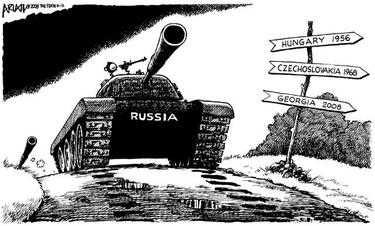 In a recent post, I mentioned the fact that the Russians hit Georgia while we were distracted by the Olympics.

But there’s nothing special about that; this is part of a pattern. It really hit me when I saw Robert’s cartoon this morning (or rather, when I saw it yesterday). Take a look at these dates:

Now, what do those dates have in common? Yep, they’re all years in which the Summer Olympics were held.

They have another thing in common, of course. They’re all U.S. presidential election years. What do you make of the fact that they choose such moments to test the resolve of the West to stop them?

Something else I just realized — those first three are all years in which Republicans were elected. Is there a connection here?