Before I left the office last night, I glanced at my stats page in Typepad and noticed something odd: I was getting a lot of hits from Google on a year-old post headlined "Carol Fowler and the Dark Side" (which, now that I look back at it, was an odd headline for the subject).

Later that night, I realized why — the quote from Ms. Fowler on Politico. Sheesh. What a bunch of nothing — my post last year was more interesting.

Folks, compared to the usual overheated rhetoric from Democrats of a certain persuasion about those of 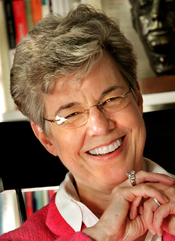 us who oppose abortion, this was nothing. When I heard the quote on TV (my wife watches TV news, even local "if it bleeds it leads" TV news, usually when I’m not in the room; but there I was trapped in my recliner holding a grandbaby and begging somebody to pop in a DVD — I ended up staying up way too late to rewatch "The Graduate"), I thought sure it would be something provocative. When I heard, "Choosing someone whose primary qualification seems to be that she has…," I thought the next thing would be a reference to some distinguishing feature of female anatomy. But when I then heard, "…n’t had an abortion," I could not freaking believe that someone was making an issue of it.

Come on, folks — at least what Don said was offensive, and I was fairly dismissive of that meaning anything, either. As any rational person who knows the way human beings talk with friends would be.

Anyway, that explains the uptick in interest over Carol Fowler. Again, sheesh.

And again, I will urge the partisans: Get over it. Democrats, quit your whining about "Swiftboating," which, I’m sorry to tell you, is not a real word, much less something for you to keep wetting your pants about, expecting the GOP to do it to you at any minute. That "quit picking on me" pose doesn’t work on anybody but your whiniest base. (And Barack, dismissing the GOPpers for acting hurt about "lipstick," then whining yourself about "Swiftboating" is about as petty as I’ve heard you get.)

And Repubicans, get over your crying about the lipstick and the Fowler remark and the mean media and the pregnant daughter and the rest.

And then let’s try to have a grownup election, OK?