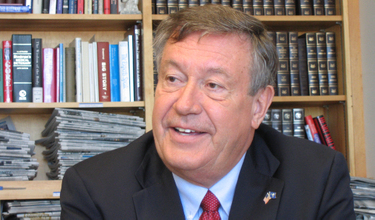 Sept. 4, 9:30 a.m. — Our first endorsement interview of the 2008 general election cycle was Jim Nelson, a Democrat who’s opposing Rep. Chip Huggins in this Irmo-Chapin district. This was the first time I’d met Mr. Nelson — and come to think of it, when Mr. Huggins comes in it may be the first time I’ve met him (and I beg his forgiveness if I’m wrong about that), even though he’s been in the House since 1999.

Mr. Nelson is an easy guy to get to know, an affable character of moderate temperament. Speaking of moderate, he was a Republican when he moved here from New York many moons ago, but was turned off by the insistence on some Kulturkampf-style resolutions at a party convention here. (When we asked for specifics, abortion was mentioned.) On another occasion, he saw an anti-tax protester at a polling place — this was the early 90s, I believe he said — and told him that in his opinion, he, Jim Nelson, didn’t pay enough taxes here in South Carolina. (He still hasn’t quite gotten over how low property taxes are here.) Around that time, he went to work for Bud Ferillo, who remarked that he couldn’t be a Republican because they agreed on two many things. (One area of disagreement he chuckled over: Bud is convinced that desegregation launched the economic growth of the South in the 60s; Mr. Nelson insists it was air-conditioning.)

Evidently, Mr. Nelson and I don’t agree on abortion, although he is not necessarily at odds with out editorial board on the subject. But we found many areas of agreement — on his opposition to vouchers, his opposition to the tax swap for school funding from the property tax to sales taxes, his support of a cigarette tax increase and his support for the governor having wider responsibility for the executive branch. He contrasted his views on vouchers and the cigarette tax with what he said were those of Mr. Huggins, but that’s all I know about that at this point.

He presents himself as a business-oriented pragmatist, who thinks South Carolina is undercutting itself by trying to do everything on the cheap: "In business, we would do it the cheap way first, and go back and do it again the right way," which he notes is wasteful. He believes this particularly applies to education. He said he told that tax protester that where he worked at the time (before Ferillo-Gregg), all the South Carolinians worked out on the loading dock. Why not, he posited, educate the S.C. kids properly so they can have the good-paying jobs "so you don’t have to import people like me."

Mr. Nelson says that demographic changes in the district make it viable for a Democrat. We’ll see. 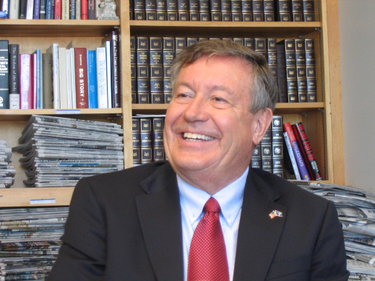