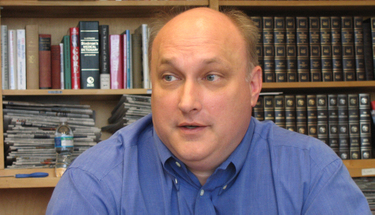 Sept. 11, 11 a.m. — When he first came to see us during the primaries, Michael Koska made a good impression — an especially good impression given that he was a newcomer to electoral politics. He had made himself expert on the issues that had gotten him involved — especially Richland County road needs — and showed a passion for learning about more.

He made an even better impression this time, and here’s one of the reasons why: As he said himself a couple of times in the interview, he’s learned and grown on the campaign trail. For instance, he expressed a tendency toward supporting vouchers. But it was fairly obvious at the time that he hadn’t really thought the issue through. Now, he doesn’t see himself supporting either vouchers or tax credits (last time he didn’t know the difference between them) "in the foreseeable future." He believes that our first priority should be fixing the public schools that need fixing.

Mr. Koska is the Republican nominee in a district that has long been strongly Democratic. But his views are not inconsistent with those of moderate South Carolina Democrats, and he goes out of his way to praise such Democrats as Joel Lourie and Anton Gunn (regarding a recent op-ed by Mr. Gunn in our paper, he said "ditto.") He maintains that if voters elect him instead of opponent Joe McEachern, he will be more likely to get things done, being a member of the majority party in the Legislature.

About the only other time he said anything about his party affiliation was when he expressed enthusiasm for his party’s vice presidential nominee. Much as Democrats have spoken of an Obama Effect this year, he predicted that Sarah Palin would do a lot of good for down-ticket Republicans such as himself.

But mostly he talked about his passion for better roads and affordable health care. His advocacy for fixing Hard Scrabble Road had won him a position on the citizen’s panel on transportation that recommended the sales tax hike, and he feels betrayed that County Council (led by Mr. McEachern) didn’t put the issue to a referendum. He said he believes the $550,000 spent on the study, not to mention the "valuable time, time spent away from their families" by the volunteers like himself, to have been cavalierly wasted. He is also critical of Mr. McEachern and the council for having bungled the county’s representation on the Council of Governments that doles out what road money there is in the area, allowing Lexington County to get the lion’s share of the funding for the next 10 years.

The council’s decision to borrow $50 million for new parks (including one in his area), and to do so without a referendum, while people are still dying on Hard Scrabble is to him an outrage.

He has a small business owner’s perspective on health care. His own personal experience and that of his acquaintances convinces him that the state must act now to make health care more affordable (he has no patience for waiting for the feds to do anything). It was like deja vu when he told about his daughter’s recent $1,800 x-ray, which sounded an awful lot like the x-rays for MY daughter, the one that ate my "economic stimulus check," if you’re recall. He was particularly incensed that when he asked the folks at the hospital in advance what the x-rays would cost, no one had any idea. Speaking of outrages, he thinks (as do I) that the stimulus checks were "the stupidest thing." If only, he says, that money had been devoted to upgrading the nation’s infrastructure…

Energy is another area where he has no interest in waiting on the federal government to act. He says the state should push to have natural gas filling stations built around the state. Natural gas, he maintains, is "probably going to be our bridge off foreign oil," but you can’t get anywhere without the retail infrastructure.

Michael Koska is a good example of what you get when a regular citizen not only gets worked up about an issue, but goes out of his way to get informed and try to do something about it. That’s why we endorsed him in the spring. Of course, we also endorsed his general election opponent, so that makes this race particularly interesting to us.