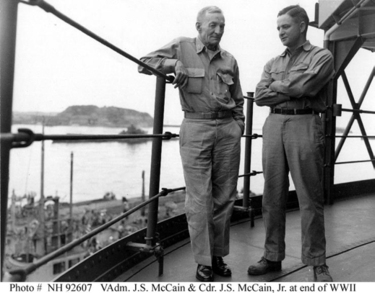 As soon as I had begun to settle into a school, my father would be reassigned, and I would find myself again a stranger in new surroundings forced to establish myself quickly in another social order.

If it sounds like I’m complaining, I’m not. It fostered in McCain and me and thousand
s like us an independence that’s hard to explain to those who never experienced it. I suspect it contributed greatly to the characteristics that his campaign inadequately, and monotonously, tries to describe with the word “maverick.”
But there was a constant in our lives. Growing up, I most often heard the United States Navy referred to as “the Service.” It both described what my father did and why he did it. It was the same for the McCains.
Barack Obama struggled for identity in his formative years largely because of the absence of his father. John McCain and I both experienced the absence of fathers: “We see much less of our fathers than do other children. Our fathers are often at sea, in peace and war.” But unlike Mr. Obama, we understood exactly who our fathers were and why they were gone:

You are taught to consider their absence not as a deprivation, but as an honor. By your father’s calling, you are born into an exclusive, noble tradition. Its standards require your father to dutifully serve a cause greater than his self-interest, and everyone around you… drafts you to the cause as well. Your father’s life is marked by brave and uncomplaining sacrifice. You are asked only to bear the inconveniences caused by his absence with a little of the same stoic acceptance.

But as much as our childhoods were alike, John McCain the man is very different. It’s one thing to know “the Service” as a dependent. It’s far different to serve. As I type that, it sounds terribly trite. Yes, we all know John McCain is a war hero, yadda-yadda, right? But I don’t care how much of a cliche it’s become, it’s true. And it sets him apart.
I can’t write a “McCain Like Me” column because from an early age, he was different. He always knew he would follow his father and grandfather to the Naval Academy. I knew nothing of the kind, and not just because my father graduated from Presbyterian College. There was a brief time in my late 20s when I considered giving up journalism for the Navy; I even took a written test for prospective officer candidates, and did well on it. But my father pointed out to me what I had always known: My chronic asthma would keep me out. So I dropped the idea.
John McCain, by contrast, rebelled against inevitability, raising hell and breaking rules all the way through his four years at Annapolis, repeatedly stepping to the brink of expulsion, and graduating fifth from the bottom of his class. Even reading about the hazing he experienced as a plebe, when upperclassmen did everything they could think of to break him and cause him to “bilge out” — nothing, compared to what he would suffer as a POW — I thought, Did I ever experience such treatment? Was I ever tested to that extent? And the answer was “no.” Nor, despite all his doubts about himself, his own period of rebellion or his sense of alienation, did Barack Obama have such a formative experience. If so, he doesn’t tell about it.
The gulf between John McCain and me would exist if he had never been captured. His heroism during those five unimaginable years — a time when he finally learned the full importance of being part of something larger than himself — only turns the gulf into an ocean.
I say that not to criticize Sen. Obama, or myself. But it’s a fact. We never knew anything like it. Men like John McCain and my friend Jack Van Loan — his fellow prisoner at the Hanoi Hilton — will forever be imbued with an aura that not even The One can claim. Some dismiss the McCain slogan “Country First” as worn-out rhetoric. But I know that for him, perhaps more than for any candidate I’ve ever known, it simply describes who he is and how he’s lived his life.
That almost certainly is not enough to help him win the election. As I watch him on the verge of failure, that saddens me. He’s had three decades to come to terms with the fact that the war in which he gave so much caused so many of his fellow Americans to lose their faith in their country, and he’s dealt with it admirably.
Now this. As I watch him drift further from his goal, I can say “Barack Like Me,” but McCain — he’s on a different plane, and always has been. And increasingly, he seems to be there alone. 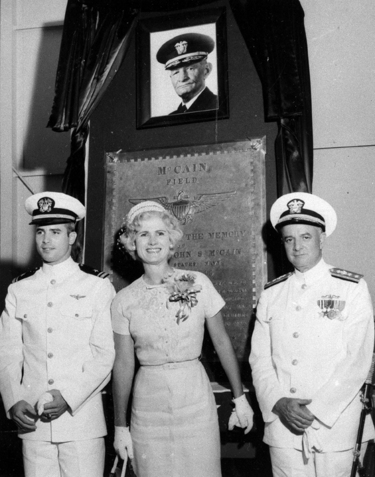 54 thoughts on “Faith of our Fathers”