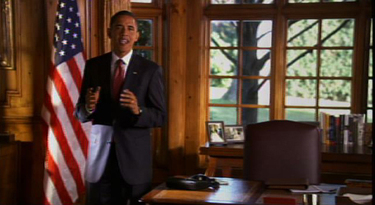 Wow. As cool as Barack Obama is — and he IS cool, all the time — some of his supporters are VERY emotional.

Two of them — Jennifer and Pam — got so worked up by my very mild use of irony on this previous post (referring to their guy as "The One") that they mistook me for a Republican. To wit:

I don’t understand why Republicans continue to call Senator Obama
"The One" – none of his supporters has ever used that term. Why do you
rely on mocking the man and spreading lies about him? Is it maybe
because you are obviously wrong on the issues? Crawl back into your
caves, please, and let us get to work cleaning up another one of your
messes.

When a party has no good ideas or solutions you slander your
opponent. Just like Brad , you know " the one " comment. The consistent
theme from the RNC and the McCain campaign is fear and hate . And ,
this paper’s editorial board enforces that theme. Sad to think that
some in this state are unable to look to the future .

p.m., thanks for pointing out the painfully obvious:

Jennifer, Oprah Winfrey introduced Obama as "The One" years ago. I
have seen the videotape. If you would Google it, you could probably
find it….

Yes, I got the thing about "The One" from that font of Republican bile, Oprah… We "Republicans" always go to her for our marching orders, talking points, swastika armbands, etc.

Folks, where are we when we can’t even use the smallest bits of irony in our public discourse without somebody getting all offended?

Come on, folks — Phillip gets it. He’s for Obama, and he can josh about the cheesiness:

Naturally, my biggest complaint was the syrupy Saving-Private-Ryan-ish background music.

And I didn’t even notice the music — leave it to Phillip; he’s our music guy. I just noticed the cheesy set, which someone was careful to make ALMOST exactly like the Oval Office, but enough unlike it to allow for plausible deniability. I mean, LOOK at it, people. Now that’s artistry.

Folks, cheesy is cheesy. Joe the Plumber — cheesy. Pandering with a gas tax cut — cheesy. Picking Sarah Palin — cheesy (although, to quote from the movie Phillip cites, I find myself "strangely attracted…"). Maverick this, maverick that — cheesy.

Now, you Obama supporters — make some ironic comments about your guy. Come on, you can do it. Look, this guy’s going to be the president, and I just won’t be able to stand four years of y’all being so deadly earnest. Loosen up.

39 thoughts on “You, too, can use irony — no experience required”