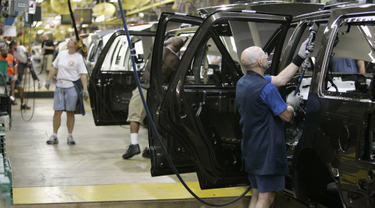 Earlier today I wrote an editorial for tomorrow’s paper that warns against being too eager to give Detroit the means to keep doing what it’s been doing, as some in Congress seem to want to do.

My reading prior to writing that led to my post about cheap gas, and in responding to a comment on that, I was reminded of something Tom Friedman wrote the other day:

O.K., now that I have all that off my chest, what do we do? I am as
terrified as anyone of the domino effect on industry and workers if
G.M. were to collapse. But if we are going to use taxpayer money to
rescue Detroit, then it should be done along the lines proposed in The
Wall Street Journal on Monday by Paul Ingrassia, a former Detroit
bureau chief for that paper.

“In return for any direct government
aid,” he wrote, “the board and the management [of G.M.] should go.
Shareholders should lose their paltry remaining equity. And a
government-appointed receiver — someone hard-nosed and nonpolitical —
should have broad power to revamp G.M. with a viable business plan and
return it to a private operation as soon as possible. That will mean
tearing up existing contracts with unions, dealers and suppliers,
closing some operations and selling others and downsizing the company
… Giving G.M. a blank check — which the company and the United Auto
Workers union badly want, and which Washington will be tempted to grant
— would be an enormous mistake.”

That, in turn, reminded me of something else Paul Ingrassia wrote recently, and that’s what this post is about. Basically, I wanted to recommend his primer, "How Detroit Drove Into a Ditch," which is a nice reminder of everything the Detroit Three (formerly the "Big Three") and the UAW did to mess up the auto industry in this country.

23 thoughts on “How Detroit got to where it is now”