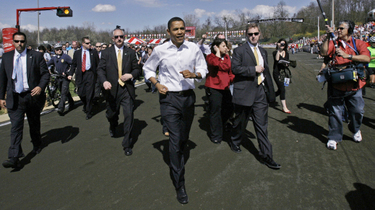 So Obama’s hitting the ground running — jawboning Bush about Detroit, and so on — and that’s a good thing. Actually, he’s running BEFORE he hits the ground, which doesn’t happen until Jan. 20, but that’s good too. The nation needs leadership in a time of economic trouble, and it hasn’t had any lately.

Team Obama is also turning to some other priorities, such as shutting down Guantanamo (which, if and when it happens, will likely be cheered by John McCain as well — even if he may quibble over what happens with regard to trying the prisoners), and signaling that it is NOT going to dismantle our intelligence apparatus (much to the consternation of Obama’s base). All to the good, and all appropriate.

But one thing that the new team is signaling as a priority puzzles me. I first ran across it in the WSJ‘s weekend interview piece with Rahm Emanuel. Headlined with the quote, "Do What You Got Elected to Do," it looked at first as though it would make eminent good sense, invoking such themes as,  "Barack Obama’s message of change and Bush and the Republicans’ record of incompetence." Fine. But then I got to this:

Asked what Barack Obama was elected to do, and what legislation he’s
likely to find on his Oval Office desk soonest, Mr. Emanuel didn’t
hesitate. "Bucket one would have children’s health care, Schip," he
said. "It has bipartisan agreement in the House and Senate. It’s
something President-elect Obama expects to see. Second would be [ending
current restrictions on federally funded] stem-cell research. And third
would be an economic recovery package focused on the two principles of
job creation and tax relief for middle-class families."

At this point, I got whiplash. Say what? Hey, I’m all for Schip and all that — for starters (it doesn’t get us to a National Health Plan, but it’s something). But I don’t recall it being, specifically, a main topic in the election. But let it pass; it fits under the umbrella of a topic Obama DID talk a lot about.

But stem-cell research? You’re kidding me, right? An issue from the very heart of the Culture Wars, the second priority of the new president? In what universe, other than that occupied by the NARALs on one side and the Right to Life lobby on the other?

Why would this supposedly pragmatic, triangulating new chief of staff choose such a pointlessly divisive cultural issue as Priority Two for a president who so famously wants to end divisiveness in the country? Does he want to make the biggest mistake since Bill Clinton, after winning as a Third Way Democrat, both lifted regulatory restrictions on abortion and tried to eliminate the barrier to gays in the military in his first days in office?

Obama making stem cells a top priority would be like … I don’t know… like a Republican getting elected and announcing that one of the first things he’ll do is intervene in something like the Terri Schiavo case. One can quibble all day about the efficacy of different approaches to research in this field — but lifting the very narrow restriction that exists on federal funding of this activity (not on whether the research will take place, but on whether we the taxpayers will pay for it) is all about bragging rights in the Culture War. It’s a big deal to the left to lift the restrictions and a big deal to the right to keep them in place, but it doesn’t bear much on the price of fish for the rest of us. In fact, the technology may be on the way to making the political argument moot.

At first I attributed this to some sort of misunderstanding. After all, this interview was conducted on the fly, in an airport, before Mr. Emanuel had even been officially offered the post of chief of staff. And it WAS couched in terms of what Obama’s "likely to find on his … desk soonest" from Congress, which is different from what his own priorities might be.

But then I started seeing other references to this Kulturkampf issue, references that indicated this would be a priority for the new administration. And I had to wonder why. Is this a sop Obama would throw to his base so they get off his back on intelligence matters? Maybe. And maybe it’s just some partisans on his transition team getting carried away with themselves.

But it gave me pause. 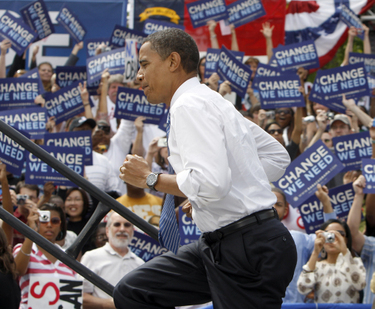 46 thoughts on “Since when do stem cells top the agenda?”