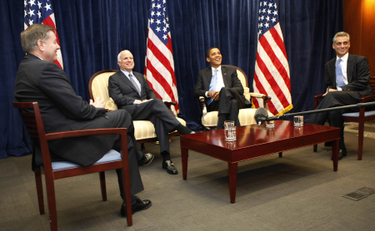 Not a lot to emerge from the president-elect’s meeting with John McCain (and Lindsey Graham and Rahm Emanuel) today, which is to be expected. Here’s the closest thing to substance I’ve seen, from their joint communique:

We hope to work together in the days and months ahead on critical
challenges like solving our financial crisis, creating a new energy
economy, and protecting our nation’s security.

Of those items, seems to me the greatest potential for collaboration would be on energy. (But I would think that, wouldn’t I?)

Here’s a scene-setter from the NYT politics blog:

Senator John McCain and President-elect Barack Obama are sitting
down together now and metaphorically smoking a peace pipe in their
first face-to-face session since the bruising campaign.

The two are meeting at Mr. Obama’s transition headquarters at a federal building in Chicago, where they just posed for the cameras.

The meeting space has a stagey look, in front of the kind of thick
royal blue curtain you see in an auditorium, not the usual
campaign-rigged blue backdrop. Flags are strewn throughout, with one
planted between the two principals, who are sitting in yellow,
Oval-Office-like chairs.

To their sides are their wingmen, Rahm Emanuel on Mr. Obama’s left
and Senator Lindsay Graham of South Carolina on Mr. McCain’s right.

They’re all looking jolly (Mr. Obama and Mr. Emanual the jolliest), and we’ll soon get a read-out on the discussion.

The Obama team is hoping they can smooth any ruffled feathers and
build an alliance with the old John McCain — not the one whom the Obama
camp called “erratic” during the presidential campaign but the
self-styled “maverick” who worked across party lines for various causes
that Mr. Obama wants to advance — global warming, immigration, earmark
spending among them.

In the brief moment before the cameras, Mr. Obama said: “We’re going
to have a good conversation about how we can do some work together to
fix up the country, and also to offer thanks to Senator McCain for the
outstanding service he’s already rendered.”

Mr. McCain was asked whether he would help Mr. Obama with his administration.

Those pesky reporters tried to shout out other queries, like about a
possible bail-out for the auto industry, but the pool report says they
were “shouted down by the pool sherpas,” and that “Mr. Obama finally
said with a smile, ‘You’re incorrigible.’”

The last in-person meeting between Mr. Obama and Mr. McCain took place more than a month ago, at the third and final presidential debate at Hofstra, remembered chiefly as the coming-out party for Joe the Plumber.

“At this defining moment in history, we believe that Americans of
all parties want and need their leaders to come together and change the
bad habits of Washington so that we can solve the common and urgent
challenges of our time. It is in this spirit that we had a productive
conversation today about the need to launch a new era of reform where
we take on government waste and bitter partisanship in Washington in
order to restore trust in government, and bring back prosperity and
opportunity for every hardworking American family. We hope to work
together in the days and months ahead on critical challenges like
solving our financial crisis, creating a new energy economy, and
protecting our nation’s security.”

Beyond that, here are versions of the story from:

27 thoughts on “The Obama-McCain meeting”