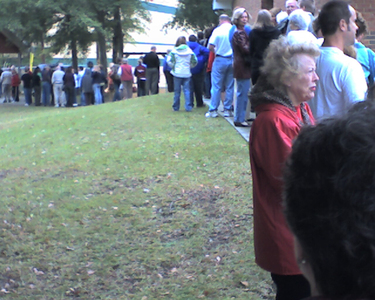 It took me an hour and forty minutes to vote at the Quail Hollow precinct — most of it standing in the breezy fine mist of rain, which gets cool after awhile even in a camel-hair sport coat. This was the first day in more than a week that I did NOT wear a sweater, which was stupid. I had looked at the weather report on my Treo — mid-60s, it said — and it simply never occurred to me that I would spend 90 minutes of the day standing outside.

But it was OK. Here are some pictures. The one at top was looking toward the front of the line, just after I joined it.

The blurry one at right is a little later, showing all the way to the front of the line. (That’s my wife in the white sweater and dark hair about halfway up, although I didn’t know that until I called her on the phone and she told me she was there; I had thought she was in Shandon watching the twins. If it had been any other sort of line, I would have gone up and cut in to join her. Somehow that seemed a violation of electoral etiquette, though.) The one below is from
about 15 minutes later, at which point the line stretched back about twice as far as the point where I had joined it at 10:08. Note that the mist was falling when those behind us got out of their cars, so they had umbrellas. Many of them did anyway; the lady colonel in the foreground did not, but she was dressed for inclement weather.

All during this there was a steady flow of old folks being escorted to the front of the line, and after a while, I must confess, I was tempted to say, "Oh yeah, right! Like you really need a walker — I’m onto you!" But I didn’t think it would be nice, so I didn’t say it.

When we finally got inside the little building behind the church, the line waiting to check in consisted of about 10 people. Then there was a long, undulating space for a line after registering with only four or five people standing in. Apparently it didn’t occur to the poll workers that they weren’t managing the flow as well as they might. The lady checking in the first half of the alphabet was moving people along pretty well — story of my life; if there’s a way to screw over the W’s, it will be found and acted upon. My half of the alphabet had to wait while our worker was distracted by the old folks bypassing the line. (The whole curbside voting thing seemed very haphazard. They had a van for awhile, but that left. Some cut to the front of the line; some went to a side door, and I got the impression that each person who did so was a bit of a surprise, and was dealt with in an ad hoc manner. But perhaps I didn’t fully perceive what was happening.)

At the front of the line, there were seven machines (not counting the young lady holding the curbside machine — why she was in there, waiting for people to check in and then accompanying them out to the voter in the car, I don’t know). But only five were in use. One of them was specially equipped, I overheard, for the hearing impaired (what role hearing played in the process I don’t know). Maybe it was rigged for sound for the blind, and I misunderstood — it appeared to have headphones attached, which for all I knew was so that the "Rock the Vote" kids could hear loud music while voting.

Why the seventh machine wasn’t in use, I don’t know.

So how did it go for you? 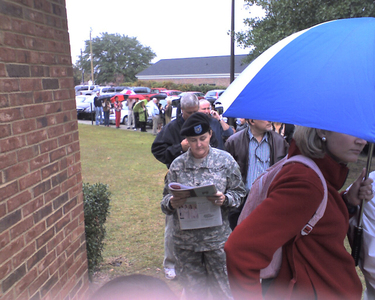 27 thoughts on “Your voting anecdotes here”