First, a warning — I’ve posted some disturbing images at the bottom of this post. They are painful to look at. If you wish to avoid them, do not scroll down!

Following up on my Sunday column, it occurs to me that it might be helpful to elaborate a little more on the proper meaning of "watched with horror." If you’ll recall, the NYT used that phrase to refer to such practices as scanning telecommunications for terrorists without proper authorization, and imprisoning supposed terrorists at Guantanamo.

In the column, I gave examples from history of things that are more properly "watched with horror," if the words are to mean anything — the Holocaust, the firebombing of Dresden, and the like. I included some from recent years — genocide in Darfur and 9/11 — but perhaps not enough. I can make it much more immediate than that.

The terror attacks in Mumbai are certainly something I "watched with horror," both from a personal and geopolitical perspective. Just days before it happened, my Dad had been reminiscing about having Shore Patrol duty in Bombay during his Navy career. That meant digging sailors out of some pretty sleazy dives, but it also meant staying at the Taj Mahal hotel. It was a shock to have that place suddenly in the news, and for something so horrific.

Two weeks ago, my brother was over there on business — and of course, he would have been a target had he been there still. As my father would have been, long before. That was underlined for me in a sidebar piece the WSJ ran Friday, accounting for the employees of various international firms in Mumbai.

Stan Dubinsky from over at USC sent me an e-mail that had been sent out by Hesh Epstein, the Chabad rabbi here in Columbia, about the young Chabad rabbi and his wife killed by the terrorists — presumably for the "crime" of being Jewish. I took a lecture course a couple of years back given by Rabbi Epstein (about Jewish beliefs regarding the Messiah, it was fascinating), and was deeply impressed by his devotion and scholarship. If it had been Hesh over there instead of that young man and his wife… the tragedy would have been far more personal. As it is, it’s bad enough.

Too much personal? Then consider the overall death toll, and the geopolitical implications — India is blaming Pakistan, and both countries have nukes.

I think what got me to thinking about the personal angles was Nicholas Kristof’s column yesterday (beware the image if you follow the link!), which I chose this morning to put on tomorrow’s op-ed page, and which started like this:

ISLAMABAD, Pakistan — Terrorism in this part of the world usually means bombs exploding or hotels burning, as the latest horrific scenes from Mumbai attest. Yet alongside the brutal public terrorism that fills the television screens, there is an equally cruel form of terrorism that gets almost no attention and thrives as a result: flinging acid on a woman’s face to leave her hideously deformed.

Here in Pakistan, I’ve been investigating such acid attacks, which are commonly used to terrorize and subjugate women and girls in a swath of Asia from Afghanistan through Cambodia (men are almost never attacked with acid). Because women usually don’t matter in this part of the world, their attackers are rarely prosecuted and acid sales are usually not controlled. It’s a kind of terrorism that becomes accepted as part of the background noise in the region…

This is something I "watch with horror," without even having to see it. Unfortunately, I DID see it, in a photograph with Kristof’s column online. And it wasn’t the first time I’ve seen such images. I had run across the ones you see below (with their original captions) a week or two ago when I was looking for something to go with a previous Kristof column, and had searched the AP archive for "Pakistan" and "women." The images all moved on the wire earlier this year.

This is the kind of thing that I believe the phrase "watched with horror" should be reserved for. And that’s my point in posting these images. I almost put them in the paper, but I thought Kristof’s column communicated the horror fully enough. As you know, one thing I use the blog for is to post things I don’t put in the paper. Maybe I was wrong to balk at doing that. But as hardened as newspapermen are supposed to be, I hesitate even now to post them here. And yet, these pictures aren’t as bad — that is, the injuries aren’t as recent — as the cases Kristof wrote about.

Kristof and his wife received the Pulitzer for reporting on the democracy movement in China years ago. He deserves another one for telling these women’s stories — as he has done for the powerless (so often women) in Darfur and elsewhere. By horrifying decent people everywhere, he performs a great service. 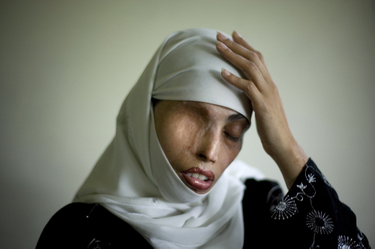 Irum Saeed, 30, adjusts her scarf as she poses for a photograph at her office at the Urdu University in Islamabad, Pakistan, Thursday, July 24, 2008. Irum was burnt on her face, back and shoulders with acid thrown in the middle of the street by a boy whom she rejected for marriage 12 years ago. She has undergone plastic surgery 25 times to try to recover from her scars with the help of Depilex-Smileagain Foundation in Lahore. Smileagain is an organization that helps burn victims to reintegrate into society through medical and psychological support, sometimes employing them as beauticians at Depilex beauty centers. Irum is one of the 240 registered victims of Smileagain’s help list in Pakistan. (AP Photo/Emilio Morenatti) 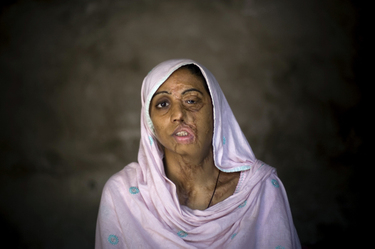 Shameem Akhter, 18, poses for a photograph at her home in Jhang, Pakistan, Wednesday, July 10, 2008. Three years ago three boys threw acid on her. Shameem has undergone plastic surgery 10 times to try to recover from her scars with the help of Depilex-Smileagain Foundation in Lahore. Smileagain is an organization that helps burn victims to reintegrate into society through medical and psychological support, sometimes employing them as beauticians at Depilex beauty centers. Shameem is one of the 240 registered victims of Smileagain’s help list in Pakistan. (AP Photo/Emilio Morenatti) 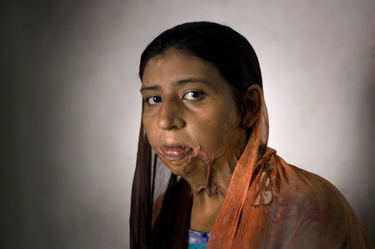 Attiya Khalil, 16, poses for a photograph at her home in Lahore, Pakistan, Wednesday, July 9, 2008. Attiya’s face was burnt with acid thrown by relatives of a neighbor boy whom she rejected for marriage around 3 years ago. She has undergone plastic surgery three times to try to recover from her scars with the help of Depilex-Smileagain Foundation in Lahore. Smileagain is an organization that helps burn victims to reintegrate into society through medical and psychological support, sometimes employing them as beauticians at Depilex beauty centers. Attiya is one of the 240 registered victims of Smileagain’s help list in Pakistan. (AP Photo/Emilio Morenatti)

8 thoughts on “Some things that I ‘watch with horror’”