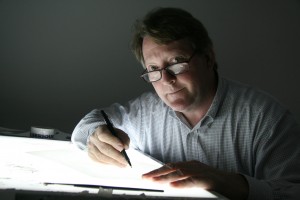 By BRAD WARTHEN
Editorial Page Editor
REMEMBER “The Dick Van Dyke Show”? For you younger folks, it was about a guy named Rob Petrie, the head writer for a fictional variety show (and if you’re too young to know what a “variety show” is, go look it up) called “The Alan Brady Show.”

There were these wonderful scenes of Rob and his colleagues at work, writing comedy sketches — a process that involved a lot of bouncing around the office, acting out and collaborative improvisation. Morey Amsterdam’s frenetic character would jump up and say something like, “OK, so Alan walks into the room…” and the other two would throw in various wild things until they made each other laugh, and the skit would take shape. It looked like the most fun a person could possibly get paid for having.

That’s what it’s been like working with my friend Robert Ariail over the past 15 years. Just like that.

Robert would come into my office after the other editors and I were done with our morning meeting (Robert doesn’t do meetings), usually with several sketches. Sometimes he’d come with nothing, but that was unusual. I’d react to the sketches, maybe suggesting dialogue changes, maybe an entirely different approach. Robert pays me the compliment of saying I think like a cartoonist. And I do. I have everything it takes — except the talent.

Robert has truckloads of that. He can sketch an idea as quickly as you can describe it, and many of those initial sketches could be published as they are. But was he satisfied? No way. He might go through 10 versions in the course of the day, coming back to my office several times to seek further feedback. This was fine, although more often than not, his first instincts were the best. He would refine, and it would get better and better, but he usually had it nailed from the start.

As you know, Robert and I are both leaving the paper. Today is our last day. Such is the state of our industry. So much for getting paid to have fun, for a collaboration that almost daily, for years on end, had both of us laughing like a couple of hyenas on nitrous oxide. How many people get to do that for even one day? We’ve had 15 years, and for that I feel blessed.

But it hasn’t been just about fun. What Robert has done has mattered, to South Carolina and the nation (which is why he’s won every national award except the Pulitzer, and he’s been a finalist for that twice). Robert can pack more punch into a cartoon than I can get into a hundred columns. There’s just something about a funny picture with a point.

That’s why the prestigious Calhoun Lecture Series at the Strom Thurmond Institute at Clemson University had Robert deliver the last talk of the term, just last week. He spoke of the history of cartooning in general, and at The State in particular. Among other things, he told this story:

Robert is the second cartoonist actually to be employed (rather than contributing on a freelance basis) by the paper. During the 1910 gubernatorial campaign, the first one did a cartoon on the race-baiting populist Cole Blease. It was hard-hitting. The surviving Gonzales brothers (original editor N.G. Gonzales had been gunned down five years earlier) didn’t see the cartoon before it appeared in the paper. The cartoon was seen as so harsh that it was widely believed to have helped Mr. Blease win the election, by causing voters to feel sorry for him. The Gonzales brothers apparently decided that having a cartoonist was a risky thing, because they never hired another one.

In fact, the position remained vacant until Robert filled it in 1984. Before he started, he was interviewed by the late Ben Morris, then the publisher, who just had one thing to tell Robert: “Don’t surprise me.” It wasn’t until Robert read the history later that he understood the reference.

Here’s hoping cartoonists aren’t like comets. Here’s hoping it doesn’t take another 74 years for another one to streak across the sky.

Perhaps I’m being overly dramatic. After all, Robert will still be around. He has a new Web site, robertariail.com — just being set up as I write this — where he will post new cartoons, and where you can find links to his old ones. And he will still be syndicated nationally, which provides him with a monetary incentive to keep ’em coming.

Beyond that, I’m happy to have reason to believe Robert will be just fine.

You see, Robert is not my first close cartoonist friend. Richard Crowson and I were at Memphis State University together in the early ’70s. The first column I wrote for the editorial page of the journalism department lab paper was illustrated by a Crowson cartoon. After college, he and I worked together for a decade at The Jackson (Tenn.) Sun. After I became news editor at the much-larger paper in Wichita, Kansas, in 1985, I persuaded Richard to pull up roots and join me out West.

So imagine how I felt when The Wichita Eagle laid Richard off six months ago — for the same reasons Robert and I are leaving The State. I was so torn up about it that I didn’t call Richard to talk about it until two days ago. And guess what? He’s happy as a clam. “For me personally, the layoff has just been great,” he said as he was driving to a recording session (he’s the finest bluegrass musician I’ve ever known). “I don’t have any money, but… how do you put a value on peace of mind?” He doesn’t miss the daily pressure one bit.

And after all my worrying. Robert’s, too. We knew he was not long for this newspaper. Sadly (for me), it has cast a pall over our daily brainstorming sessions, sometimes making me impatient and crabby — although Robert kept cranking out wonderful cartoons anyway.

But the past few days, since the news broke, have been great. With the pressure off, the old fun has returned. That may sound odd, but it’s true.

And this is the way I’m going to remember it.

Robert and I will still collaborate at every opportunity. Find his future work at robertariail.com. My new address is bradwarthen.com. 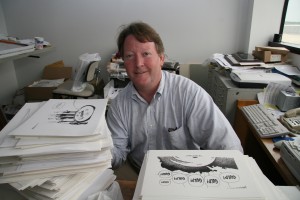 12 thoughts on “Getting paid to have a blast: Working with Robert”