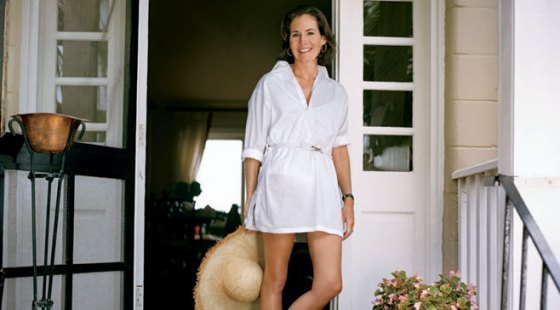 Just when you thought there weren’t any ways left to look at the Sanford scandal, along comes the Vogue treatment of Jenny Sanford as the wronged woman America loves and admires most.

The glamour shot above is just the beginning. An excerpt:

Early this past summer, just as the world was savoring the news that yet another conservative Republican politician had tumbled from grace in a manner worthy of the best French farce—“hiking the Appalachian Trail” will never have the same meaning—there emerged an unlikely hero in the mess down in South Carolina. Petite, clear-eyed, strong-willed, pious without being smug, smart without being caustic, Jenny Sanford became an unlikely heroine by telling the simple truth. Her children were the most important thing in the world to her. She had kicked the lying bum out of the house when he refused to give up his mistress, but marriage is complex, life is hard, and if he wanted to try and make the marriage work, the door was open.

Her one-page statement saying as much was written without the help of spin doctors or media consultants. It came from her heart and her head. It mentioned God without making you squirm. The world took note. Newsweek dubbed her a “media genius”; The Washington Post hailed her as “a new role model for wronged spouses.” On television, Diane Sawyer called her classy, praising her “grace in the glare.” While her husband was giving overly emotional press conferences about soul mates and impossible love, Sanford kept her mouth shut and her head down. Just as the scandal was finally dying down, she agreed to sit with Vogue and set the record straight about what really happened in the low country of South Carolina….

… to which I can only say, which is it, Vogue — “hero” or “heroine?” (I would recommend the latter, but then I’m such an unreconstructed language chauvinist.) I knew that newspapers were short on editors, but Vogue?…

Anyway, more power to Jenny, say I. I’m still waiting for someone to start cranking out those special “WWJD” bracelets…

7 thoughts on “The Sanford scandal gets the glamour treatment”