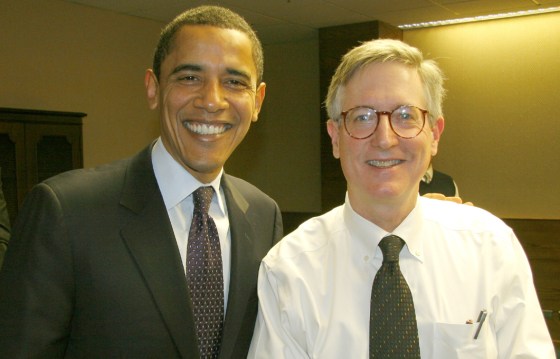 You know how back in the day, people would say they didn’t smoke dope, but if a joint was going around they’d take a toke “to be polite?” Doonesbury once made fun of it, with Zonker speaking the punch line, “I’m VERY polite.”

Well, I’m sort of that way about getting my picture taken with the guest of honor at rubber chicken dinners, receptions, etc. When somebody (usually some enthusiastic lady who has worked hard to put on the event) tugs my elbow and says, “Come have your picture taken with …” whomever, I may grumble a bit, but then shrug and make the best of it.

That explains why there are photographs of me with a wide variety of people, from our latest political persona non grata Joe Wilson (see the new header on my home page) to people I actually feel a little intimidated and unworthy standing next to, such as Elie Wiesel (below). You can see the awkwardness in my face on that one.

But in the Wilson pic, I’m perfectly at ease. You can probably even see a bit of amusement. This was taken at a reception for Joe at the Republican National Convention in New York. This was the last time the newspaper ever paid for me to travel out of state to do journalism, and I thoroughly enjoyed it. At this point, I’m grinning both to be a good sport, and because all week, I had been watching Joe really, REALLY enjoying being at the convention. Joe just has to pinch himself all the time, he SO enjoys being in Congress, and being a Republican, and being around other Republicans, to the point that he just wants to be friends with everybody. He was definitely not saying “You lie!” to anyone that week.

I don’t get enthusiastic like that, and people who do make me smile. Different strokes.

The Obama picture is slightly more complicated. In this case, I was amused not by the candidate, but by the excitement among some of the other people in the room. This was immediately following our editorial endorsement meeting. And while there were no member of the editorial board asking to have their pictures taken with the candidate (Warren, Mike and Cindi are too cool and professional for that) this was one of those meetings that people from around the building who had nothing to do with our editorial decisions asked if they could sit in, and I always said yes to such requests, as long as there was room and no one was disruptive.

And some of them were lining up eagerly to have their pictures taken with Obama. If you’ll recall, this is the kind of excitement his candidacy engendered. The candidate was anxious to get downstairs and put on some longjohns in the men’s room before going to sit in the freezing cold at the MLK Day rally at the State House, but he was a good sport about it.

And after several of these pictures were taken, I said — with an ironic tone, making a joke of it — well, why don’t I get MY picture with the senator, too!? Of course, it wasn’t entirely a joke.  On some level, I was thinking that someday my grandchildren will want proof that I met all these famous people, and for the most part I don’t have any photographic proof. Here was my chance to get some, as long as everybody was camera-happy. I was also thinking, it’s all very well to be cool and professional but isn’t it a fool who plays it cool by making the world a little colder? Or something. Anyway, I like to do things that other more staid professionals turn their noses up at. It’s why I started a blog, while my colleagues didn’t. It’s why I do http://blogs.thestate.com/bradwarthensblog/2007/10/the-colbert-end.html”>silly stuff like this. You enjoy life more this way…

My regret that I have looking back is that I didn’t get my picture taken with John McCain, Joe Biden, George W. Bush, John Kerry, Al Gore, Ralph Nader, Ted Sorensen, Benazhir Bhutto, Jesse Jackson, or hosts of others. Mainly because I was too cool at the time when I was around them (especially back in the days when I spent a lot of time with Al Gore — in my early career I would have been WAY too self-righteous to pose for any such thing). I never even got my picture taken with Strom Thurmond. You know what? Next time I see Fritz Hollings, I’m going to ask somebody to take our picture…