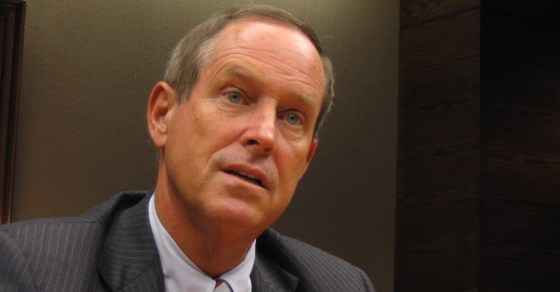 A lot of folks are presuming to explain Joe Wilson, based on the impression he made last week in his Tourette’s Moment (or the far worse impression he’s made since then trying to leverage the moment to his political advantage). Some, such as bloggers from the left, are explaining it as just the sort of thing you expect from those idiot Republicans. Voices on the right, meanwhile, hail Joe as the guy who was saying What Real Americans Think (which you know has gotta be making Sarah Palin jealous, because what else has she got now that she’s not governor any more?). Maureen Dowd, after saying she was “loath” to resort to such oversimplification, chalked it up to racism, asserting that what Joe really meant was “You lie, boy!”

Well now, there’s something to that if you’re making a general statement about the Republican Party in the South. There was a time when to be a Republican in the South meant you were either a reformer who couldn’t bring himself to join the Old Boy network that was the Democratic Party, or black. But then Strom Thurmond, inspired by Lyndon Johnson’s embrace of civil rights, defected to the GOP in 1964. It took awhile for a lot of white voters to follow him. But then some of the folks who followed George Wallace in his independent run in 1968 just didn’t go back. Some considered themselves independents for awhile, but they eventually drifted into the GOP, and after awhile a certain dynamic was in place whereby more and more white folks got the impression that all the other white folks were going over there, and joined them.

The process wouldn’t be complete in South Carolina until Republican lawmakers persuaded some black Democrats to join forces with them in a reapportionment battle in the 90s. Here’s where things get more complicated than the Dowd explanation. You see, after a certain point (the point to which white Democrats were willing to go), the only way you can create another black-majority district (which will presumably, according to conventional wisdom, elect black candidates) is by creating several surrounding districts that have been bleached free of black voters. Such districts are FAR more likely to elect a white Republican than a Democrat of any color. Anyway, that reapportionment deal led to the election of a few more black members and a LOT more white Republicans, which is how the GOP took over the Legislature.

So yeah, the dynamics that produce a Joe Wilson — or a Jim Clyburn — are just shot through with racial considerations. So you can always say that race is part of the equation in any confrontation such as we saw last week. I haven’t examined the list of people who contributed to Joe Wilson’s campaign coffers last week because he made an ass of himself, but I’m thinking it’s pretty safe to say that it’s somewhat whiter than South Carolina as a whole — and most likely whiter even than the 2nd District.

Does that mean Joe Wilson is a racist? No. The idea would shock him. He would sputter and protest in that out-of-breath way he has when he’s excited, and he would be absolutely sincere. I know Joe Wilson; I’ve known him for more than two decades, and I know that he’d mean it when he said that he’d never judge the president or anyone else by the color of his skin. Joe Wilson is a guy who goes out of his way to be nice to everybody.

No, there’s another explanation for why a guy like Joe Wilson gets elected, and why huge numbers of white folks will flock to his side when the Nancy Pelosis of the world are looking daggers at him. It’s a phenomenon that runs in parallel to the narrative of race in our state’s history, one that is so interwoven with it that whenever it appears, people look right past it and see only the racial aspect, black and white being less subtle than what I’m talking about.

White South Carolinians, as a group, exhibit a trait that is not at all unusual in this nation, but which has shown some of its most extreme expressions in the Palmetto State. It’s the thing that makes a guy put his foot down and declare that no government is going to tell him what to do. This manifests itself in lots of ways. It was surging through the veins of those Citadel cadets firing on Fort Sumter. Yes, you can say that the Civil War (conceived and launched right here in South Carolina) was about race. You can say it was about a minority of wealthy whites wanting to keep black people as their property, and the majority of whites being dumb enough to go along with them on it, even though it was not it their economic interests (or any other kind of interest) to do so. But ask yourself, HOW did the ruling elites get all those other whites to go along with them? By selling them on the idea that the federal government was trying to run their lives. It worked like a charm, and we’ve been reaping the evil result of that madness ever since.

It’s no accident that we have twice elected a governor who has NO accomplishments to point to and who distinguished himself by being the last governor in the union to accept stimulus funds that S.C. taxpayers were (like taxpayers everywhere, if they live long enough) going to have to pay for. Standing against gummint involvement, especially federal gummint involvement, plays well among a significant swath of the electorate here.

But defiance is not a necessary ingredient. If it were, Joe Wilson would not have gotten as far as he has. He’s no stump-thumper (the shouting incident was truly anomalous); you wouldn’t mistake him for Ben Tillman, or even Strom Thurmond. But Joe Wilson is the natural heir of another political phenomenon that Thurmond embodied (and Sanford has raised to an art form): the do-nothing officeholder.

It’s a twist on the Jeffersonian notion that one is safest when the government governs least, a play on the old joke that we’re all safe now because the Legislature’s gone home, etc.

We all know about the highlights, or lowlights, of Strom Thurmond’s career — his Dixiecrat campaign, his infamous filibuster against the Civil Rights Act, his later mellowing on race, etc. Less noticed by the popular imagination is that for most of his multi-generational career, he didn’t do much of anything. In fact, the only legislation I can remember bearing his mark in the years that I was responsible for The State‘s coverage of him was those little health warnings on beer cans and wine bottles. That’s about it. I mean, that’s something, but it’s not much to show for half a century in the Senate.

What Strom Thurmond did was constituent service. He perfected the technique of staying in office by being the voters’ (black voters or white voters, he didn’t care) own personal Godfather in Washington. You got a problem with that big, bad government up there? Talk to your Godfather. Doing personal favors for people was far more important than lawmaking. And this made him politically invulnerable.

Over in the House, the member who best embodied the Thurmond Method — minimum lawmaking, maximum constituent service — was Floyd Spence. Joe Wilson became Spence’s acolyte, his squire, his sincere imitator. It was perfectly natural that he became his successor. Floyd was a nice guy who loved being a congressman but didn’t want to accomplish much in Washington beyond constituent service and a strong military, and Joe fits that description to a T.

The 2nd District has come to expect, even more than any other district in the state, elected representation that Does Nothing on the national scene (beyond fiercely supporting a muscular national defense, of course).

The representative of that district, who is very much the product of that non-governing philosophy, is bound to be at odds with a president who is the product of the Do Something philosophy of government. And you can see how he might get a little carried away with himself in trying to stop the Biggest Thing Barack Obama has tried to get the government to Do.

And yes, you can describe this dichotomy in racial terms. The folks who keep re-electing Jim Clyburn want government to Do As Much As Possible (at least, that’s how he interprets his mandate, and I don’t think he’s wrong), while Joe Wilson’s constituents tend to want the opposite. And those districts were drawn to put as many black voters in Clyburn’s 6th District as possible, thereby leaving the 2nd (and the 3rd and the 4th the 1st, and to some extent the 5th) far whiter than they would be if you drew the lines without regard to race.

I’m just saying there’s a lot more at work than that.

25 thoughts on “Let me tell you about Joe Wilson…”