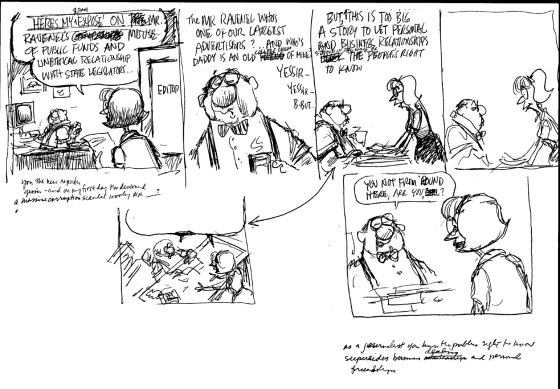 Over the weekend, I was going through stacks and stacks of files I brought home when I left The State — mostly stuff I had squirreled away that most people would have thrown away as soon as it touched their desks. If you’ll allow me to mix animal metaphors, I am a notorious pack rat. This has sometimes made me useful to neater people, who will come to me and say, “Remember that memo about such-and-such back in the early 90s? You wouldn’t happen to…?” … and I’d put my hands on it within minutes.

No, not that kind of strip. A comic strip. The one that Robert Ariail and I brainstormed about at great length back in the mid-90s. It centered around a guy who was a sort of lobbyist-good-ol’-boy friend-of-all in a Southern state capital, a fairly harmless and ineffectual character who lived, improbably, in a boarding house. A small part of the strip centered around a fictional newspaper (and any resemblance to any newspaper, living or dead, is entirely coincidental) called The Status Quo. It was not a realistic newspaper, but a caricature composed of charming (to us) little idiosyncracies that were particularly Southern and fallible and 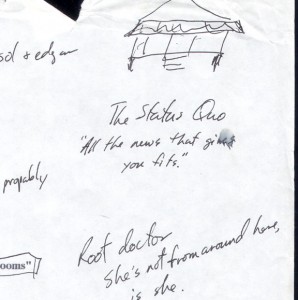 It was that newspaper for which I invented the slogan, “All the News that Gives You Fits,” which this blog now bears. You can see at right a detail from the piece of paper upon which I first jotted that idea, back in either 1994 or 95.

Anyway, for your enjoyment you will find an actual strip that Robert sketched up (characters and dialogue suggested by me) above, and a sheet on which Robert tried to get a feel for the protagonist and other characters, below. Finally, at the bottom, you’ll find some additional sketches, including “Sol” and “Edgar” the two mice who lived in the State House and secretly wrote every bill that ever actually passed (our hero’s friendship with the mice was the key to his success as a lobbyist, such as it was).

We had spent an inordinate amount of time discussing these characters. The two in the strip above were the crusty old editor and the young reporter who, as the editor notes, was “not from around here.” She lived in the same boarding house as our “hero,” and was to be the straight woman for a lot of the comedy. (This is beginning to sound like a Lou Grant/Mary Tyler Moore relationship, and I suppose it owed something to that.)

As I wrote before, Robert’s syndicate turned down the strip and we never revived it, although I continued to have hopes for it, even 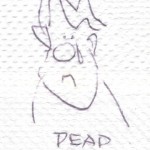 as newspaper comics pages dropped features right and left. I’d still like to come up with a way of doing it online, if I could talk Robert into it. At right you’ll see a memo Robert gave me to tell me about the syndicate’s thumbs-down. He drew it on a napkin: Our hero, with a tear running down his cheek, and a one-word message.

Weird, isn’t it — I have this little treasure trove of memorabilia about a comic strip that never was. A rare collection, indeed. 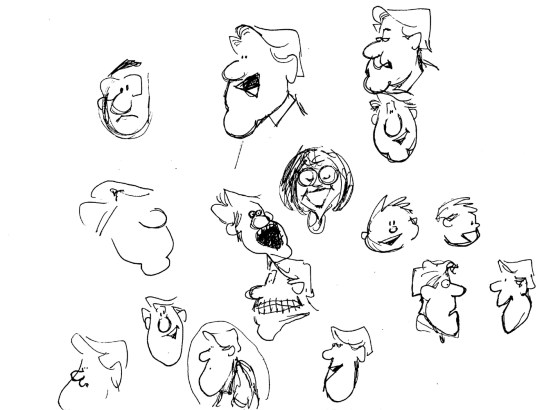 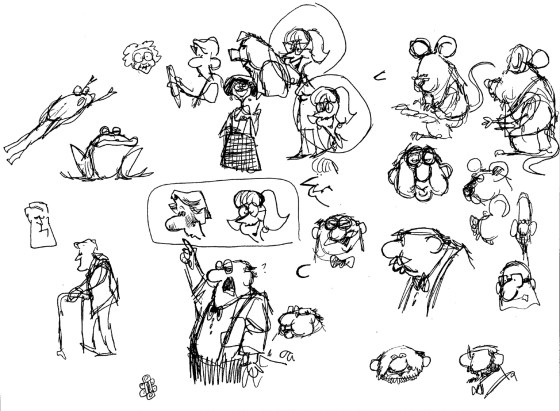 7 thoughts on “From the newsroom of The Status Quo”