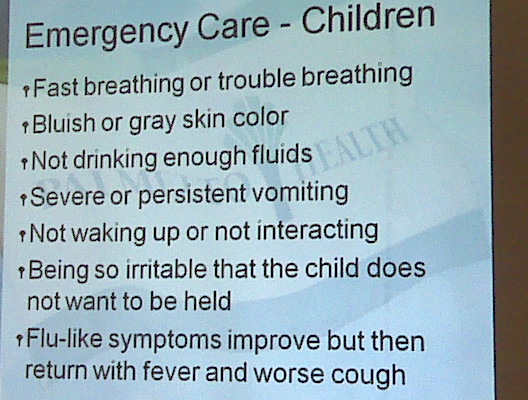 Ever since Monday I’ve been meaning to share some things I learned about swine flu at Rotary on Monday. Dr. Stephen L. Shelton from Palmetto Health spoke from a wealth of expertise on the H1N1 virus. (Over at the hospital they call him Boss Hog.)

Some of it was highly technical, such as the diagram of the virus that he used to explain why it’s called H1N1. I’m afraid that sort of went in one ear and out the other. Other parts were sort of obvious, such as a list of typical flu symptoms, or what to do if you get it (drink fluids, avoid contact with others, stay home for 24 hours after fever is gone).

More useful were some of the slides in his presentation, such as the one I photographed above about how to tell when your child needs to go to the emergency room rather than simply be treated at home.

Beyond that, the following points really stood out in my mind:

Anyway, those are the points that made an impression on me.

By the way, for a video version of Dr. Shelton’s presentation, follow this link.

10 thoughts on “What I learned about swine flu”