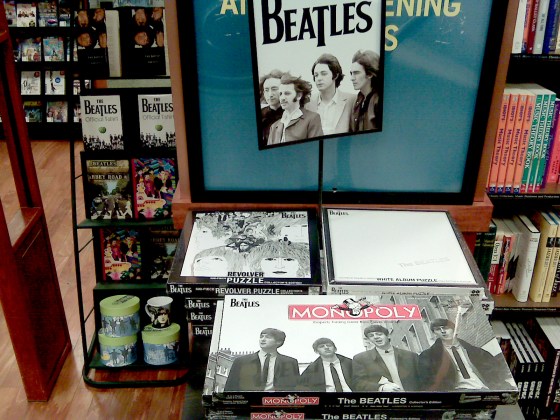 Once again, I am puzzled by Beatlemania.

The first time, I was living in Guayaquil, Ecuador in early 1964. Communicating with the States — or Britain, for that matter — was a cumbersome affair, hardly speedier than in the Napoleonic era that I enjoy reading about in those books I’m always on about (just finished reading The Fortune of War for the fourth time). The only television we had was one local station that was only on the air from about 4 in the afternoon until 10 at night, and ran mostly American cartoons and TV shows dubbed into Spanish. Imagine being an Ecuadorean and trying to grok “The Beverly Hillbillies” with Granny and Jethro speaking Spanish out of sync with their lips, and you will begin to see the roots of whatever appreciation for the absurd that I today possess. For our part, we didn’t bother — we left our TV set gathering dust down in the bodega with the shelves of canned goods ordered from the Navy Exchange in Panama, for the entire two-and-a-half years we were there.

But we did occasionally see The Miami Herald, although generally a couple of weeks late. And it was on the front page of one of these old papers that I saw the shouting banner headline, “Beatles Hit Miami,” or something like that. I thought it referred to an insect infestation of Biblical proportions, given the huge play.

Eventually, I figured it out, and was entranced. My Beatles fanhood in those early days was probably intensified by the difficulty of keeping up with the Fab Four at a distance. I occasionally found a 45 for sale in a local tienda (I think my first was “Love Me Do”), and I still treasure the first album I ever owned, an Odeon release titled, “La Banda Original de la Pelicula ‘A Hard Days Night.”

Anyway, to bring you to the present day — I fear that I am fated to remain confused by the most recent manifestation of Beatlemania. Or perhaps I should say “alienated” rather than “confused,” because I sort of understand it, but am put off by it. This one is different.

This one doesn’t arise spontaneously, up from below. It’s not a cry of love from the fans. It seems a calculated effort to impose enthusiasm upon a new generation, imposed from above by the masters of the marketing universe.

Note the display I photographed moments ago in the Barnes & Noble from which I am blogging. Not that I’m criticizing Barnes & Noble; I love Barnes & Noble as Winston loved Big Brother. Drinking wonderful Starbucks coffee, listening to “Instant Karma” via Pandora, sitting near a foreign chap wearing a T-shirt that proclaims “FREEDOM AND EQUALITY FOR PALESTINE” who looked furtively about him as he sat, seemingly expecting someone to challenge or argue with him or something, and in another direction a cute schoolgirl bent low doing her homework with an ipod in her ears, who kindly watched my laptop while I ran to the head… WHOA! The caffeine seems to have taken hold… where was I?

Oh, yes… nothing against Barnes & Noble. And certainly nothing against Starbucks; my slavish affection for Starbucks is well-documented. But both are very much apart of this vast commercial conspiracy to market the Beatles like mad, all of a sudden.

Is it really all prompted by the release of a video game? That’s the way it appears. I know it’s not a plot by Michael Jackson, who sneakily snapped up the rights to the Beatles’ songs years ago, because I seem to have heard that he is no longer among the living. It got quite a bit of play, as I recall.

So what’s it all about, Alfie? And how should a true Beatles fan react?

9 thoughts on “What’s with this ubiquitous pseudo-Beatlemania?”