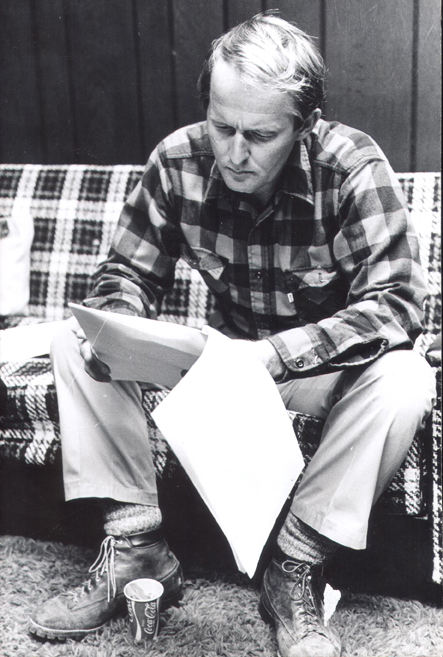 Back on this post, I made a gratuitous name-dropping reference to covering Lamar Alexander back during his gubernatorial campaign in 1978, and Kathryn replied with a suitably unimpressed, “Plaid shirt guy. Swell.”

Indeed, as name-dropping goes, “Lamar” isn’t the same as “Elvis.” So it was a forgettable reference.

I only return to it because, coincidentally, I was going through even MORE files from my newspaper career just hours later, and ran across these two shots from that week I followed Alexander in 1978. I practically lived with the guy that whole time. I flew on his campaign plane with him (with my paper paying a pro rata share of the cost), went where he went, ate where he ate… I’d get about five or six hours away from him at night, and spent a couple of hours of that in my hotel room writing. We used to do stuff like that in those days — actually cover political campaigns.

This was a pretty exciting experience for me, my first exposure to statewide politics as a reporter. The following week, I was following his opponent, Jake Butcher, just as closely. We sort of tag-teamed the candidates in the last weeks of the election.

Anyway, the photo above, with Lamar’s tasteful plaid shirt clashing with a really ugly plaid sofa (be grateful it’s not in color) in the back room of a political headquarters in Nashville, captures a tense moment for the candidate. He had just been interrupted during this Nashville leg of his celebrated walk across the state by a reporter from the Tennessean with legal papers in hand. The legal papers — affidavits, I believe — had something to do with a business deal Alexander had been involved in. I want to say it had to do with ownership of some Ruby Tuesday restaurant franchises.

Anyway, somebody was alleging there was something irregular about it, and the candidate was being confronted with it. Big drama. This was his first look at the document, and there he sits with a suitably furrowed brow while we stare at him and wait for a reaction. One of us (guess who) is actually taking pictures of this potentially bad moment for Lamar Alexander. We were all about the next political scandal in those days, and Lamar had served in the Nixon White House, so he knew to take such things seriously, and soberly, and not complain about the pesky press.

But I will confess now to a bit of feeling bad for the guy at that moment. We weren’t supposed to feel that way, but I did. Even as I was dutifully taking the picture (if this is the end of his candidacy, I captured the moment!), I was sort of thinking it would be kind of nice if the guy had a moment to read this in privacy and compose his thoughts — if only so we could get actual facts from him instead of a gut reaction. But we didn’t allow him that.

Anyway, to balance that, here’s a happier moment below. It was taken on his campaign plane, as it was preparing for takeoff, early on the morning of Oct. 18, 1978 (going by the newspaper). The Yanks, as you see, had just won the World Series again. Check out Jimmy Carter and Moshe Dayan. The day was going well so far — no scandals yet — and was filled with possibilities.

I like the way the light works in the picture. I was a pretty fair photographer, for a reporter.

Sorry if I’m boring y’all. Don’t know why I’m taking y’all down memory lane. Oh yes, I do: This is my way of getting y’all to think, Ol’ Brad has been covering this politics stuff up close and personal for a long, LONG time, so maybe sometimes his reflections are based in experience and not just gut reactions.

Anyway, it’s certainly been a long time. Burl and I graduated from Radford High just seven years before this… 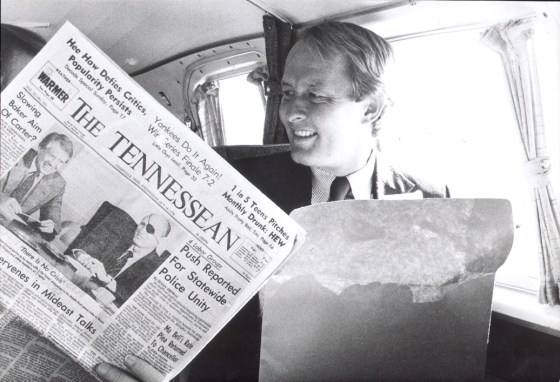