KP brought this bit from “The Daily Show” to my attention. It was introduced with the explanation that it’s hard coming up with enough material for a comedy show every day, so…

He went on to remind his viewers that SC is the place where the elected representatives shout “You lie!,” where the governor goes to Argentina to meet his mistress on the taxpayer’s dime, and where (in a South Carolina story that we paid little attention to, but which is one of Jon Stewart’s favorites — a man is charged with having sex with a horse… twice… with the same horse).

This time the source of hilarity was our lieutenant governor — pause for laughter — who compared poor children to stray animals. Mr. Stewart then played Andre’s “explanation” of his remarks, to which he could only say:

You know, it’s interesting… especially in South Carolina, you keep giving them a chance, and they keep (bleep)ing that same horse. 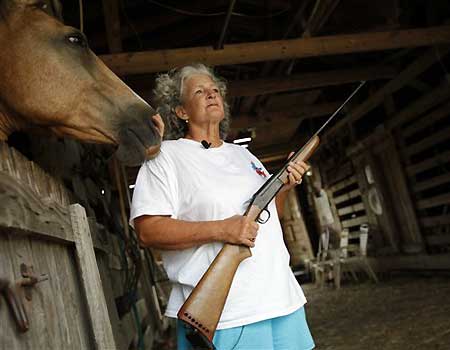 Barbara Kenly of Little River guards her horse, Sugar, after allegedly catching a man having sex with the mare...

22 thoughts on “Jon Stewart again thanks South Carolina, the state that keeps on giving”