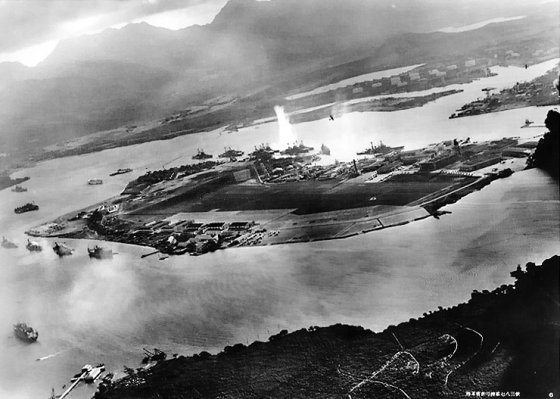 View from Japanese plane as attack begins. But some attackers saw Battleship Row from beneath the surface of the Harbor itself ...

I don’t know what you’ll be doing at 8 p.m. tonight, but I plan to tune in to PBS to see “Killer Subs of Pearl Harbor.” Burl says he will be “one of the third-tier talking heads” on this installment of “NOVA.” The premise? According to Time Warner Cable’s listing, “Japanese midget submarine may have played a role in the sinking of the USS Arizona.”

Y’all know Burl Burlingame — he’s a regular here on the blog. You may even know that he’s a journalist out in Hawaii, and that he and I graduated from Radford High School together in 1971. What you may not know is that Burl is a military historian who is particularly respected for his knowledge of Japanese mini-subs.

So tune in, turn on and all that stuff. And be sure to check out NOVA’s Web material on the subject, which Burl helped put together.

And if you can’t wait — or if you won’t be able to tune in tonight — listen to Burl in this podcast from NOVA’s Web site.