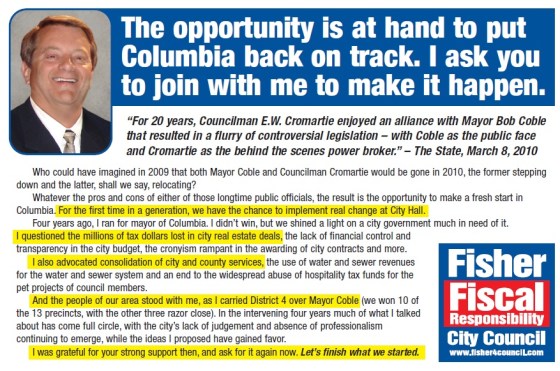 My e-mail today contains several items from candidates in Columbia’s April 6 election. In this mailing, District 4 council candidate Kevin Fisher admonishes his former rival Bob Coble not to let the doorknob hit him in the butt on the way out. Although it must be said that Kevin didn’t exactly kick the mayor on the way out, he wasn’t quite as kind as he was to me when I left the paper:

Who could have imagined in 2009 that both Mayor Coble and Councilman Cromartie would be gone in 2010, the former stepping down and the latter, shall we say, relocating?
Whatever the pros and cons of either of those longtime public officials, the result is the opportunity to make a fresh start in Columbia. For the first time in a generation, we have the chance to implement real change at City Hall.
Four years ago, I ran for mayor of Columbia. I didn’t win, but we shined a light on a city government much in need of it. I questioned the millions of tax dollars lost in city real estate deals, the lack of financial control and transparency in the city budget, the cronyism rampant in the awarding of city contracts and more.
I also advocated consolidation of city and county services, the use of water and sewer revenues for the water and sewer system and an end to the widespread abuse of hospitality tax funds for the pet projects of council members.
And the people of our area stood with me, as I carried District 4 over Mayor Coble (we won 10 of the 13 precincts, with the other three razor close). In the intervening four years much of what I talked about has come full circle, with the city’s lack of judgement and absence of professionalism continuing to emerge, while the ideas I proposed have gained favor.
I was grateful for your strong support then, and ask for it again now. Let’s finish what we started.

Kevin, being a fellow communications professional, is probably running the slickest campaign of all the council candidates. But you’d think he could come up with a better picture of himself. He looks like the Merry Prankster. 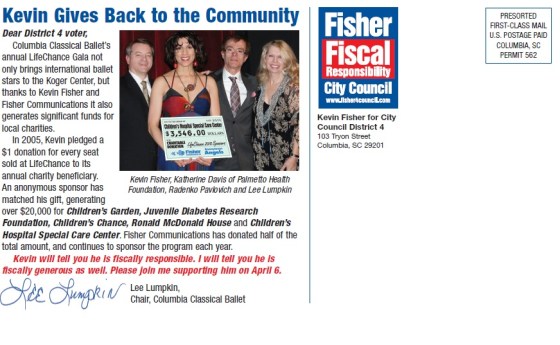