As you may have gathered along the way, I am a huge fan of “Band of Brothers.” I think it is THE best thing ever made for television, and not just because it was my idea.

I’m not claiming a cause-and-effect relationship here, but here’s what happened: Back in the 90s, sometime near the 50th anniversary of the Normandy invasion, I picked up a copy of Stephen Ambrose’s D-Day for a song at a discount book sale in a former supermarket space in Surfside. I really, really got into it, from the wonderful personal stories — every one of the half a million men involved in that landing had a slightly different, and fascinating, perspective on that remarkable day — to the statistics that painted a vivid picture of what the world was like then. Such as this portrait of the average American soldier:

The U.S. Army’s infantry divisions were not elite, by definition, but they had some outstanding characteristics. Although they were made up, primarily, of conscripted troops, there was a vast difference between American draftees and their German counterparts (not to mention the Ost battalions). The American Selective Service System was just that, selective. One-third of the men called to service were rejected after physical examinations, making the average draftee brighter, healthier, and better educated than the average American. He was twenty-six years old, five feet eight inches tall, weighed 144 pounds, had a thirty-three-and-a-half-inch chest, and a thirty-one-inch waist. After thirteen weeks of basic training, he’d gained seven pounds (and converted many of his original pounds from fat to muscle) and added at least an inch to his chest. Nearly half the draftees were high-school graduates; one in ten had some college. As Geoffrey Perret puts it in his history of the U.S. Army in World War II, “These were the best-educated enlisted men of any army in history.”

Puny little guys, weren’t they? Chests of 33.5 inches? Yet they were the fittest recruits ever molded into an Army.

I got so into that book that I started reading all his other books connected to that one, such as Pegasus Bridge and Citizen Soldiers (sort of the sequel to D-Day). But my favorite of them all was Band of Brothers. In its narrative form, it was like my favorite novel from my mid-teens, Leon Uris’ Battle Cry: It took a group of young men from disparate backgrounds and followed them through some of the most significant battles of the war (in the novel, Guadalcanal, Tarawa, Saipan; with the history, Normandy, Holland, Bastogne, Hitler’s Eagle’s Nest), and all their experiences between battles (in New Zealand and England) ,giving a deep sense of the kind of bonds that such experiences form.

Battle Cry had had a huge impact on me. I had come to care deeply about all of the characters, following them through several intense years of their lives, and when a huge number of them were killed in a matter of minutes in the final beach landing, it was hard to take. (The experience was so impressive that the new album I was listening to at the time that I first read it — “Abbey Road,” which lets you know I was reading it in the fall of 1969 — became oddly linked with it from then on. Improbable, but true.)

Unfortunately, a movie was made from Battle Cry, a really bad movie, that did it a great disservice. Over the years, I had thought how much better it could have been if remade as a high-quality series — 10 or 12 hours in length. That could have done it justice.

When I read Band of Brothers, I thought the same thing. In particular, I thought in terms of an HBO-quality series in the mold of “From the Earth to the Moon.” That series, a Tom Hanks production, had followed upon the wonderful “Apollo 13,” a film that had captured the same kind of camaraderie and can-do and “we’re all in this together” spirit that was an aspect of Uris’ novel, the spirit that characterized the early 1940s in this country, and which I’ve always felt deprived for having missed.

About that time, I saw “Saving Private Ryan,” and saw that it was possible to make the kind of WWII flick that no one had ever made before, and which I had always longed to see. So I decided that Tom Hanks and Steven Spielberg were just the team to produce a serialized version of Band of Brothers and do it justice. And I determined that the only venue for that series, the only outlet that had demonstrated a willingness to present the kind of series I had in mind, was HBO.

So for some months, I had this recurring urge to write to Messrs. Hanks, Spielberg and Ambrose with my proposal. I even fantasized about being able to help with the project, perhaps with some of the screenwriting. I had it all thought out. But I never wrote to them, for a number of reasons. One was that it smelled like a fan letter, and I had never written one of those in my life (or a letter to the editor, either). It would have embarrassed me to write something that would come across as “Gee willikers, I sure think your pictures are swell, and I’d love to help you make one.” Also, I didn’t see any way it would do any good; who would pay attention?

Then, several months after I’d given up on the idea altogether, I read that those guys were producing a series based on Band of Brothers for HBO. I was pretty stunned. I was also kicking myself. I had cause to reflect that while I was too embarrassed to write a “fan letter,” Tom Hanks and Steven Spielberg didn’t worry about such things, but unabashedly produced wonderful films showing what fans they were of the guys who fought that war. People who worry about being cool don’t get things done, unfortunately.

But even though I’d had nothing to do with making it, the series was everything I had envisioned. It was fantastic. I got to watch it more or less in real time because my Dad got HBO just for the purpose of seeing it, and he taped it for me. Then, when the DVD set came out, that was the only thing I wanted for Christmas, and that was what I got. I’ve watched it quite a few times (favorite episode: Episode 7 in the Ardennes), and am always pleased and impressed.

So imagine how cool I think it is that the same team is about to unveil “The Pacific.” A “Band of Brothers” in the same theater as Battle Cry. Wow.

I was getting all pumped about it, when it hit me — I don’t have HBO, and neither does my Dad, nor anyone else in the family.

Major bummer. Not that everyone cares. I mentioned it to my wife last night, with a tinge of anguish in my voice, and she said, “Poor you,” in that sarcastic way that wives have. So the chances of Mamanem letting me GET HBO to watch this, given our current state of pecuniary strangulation (a phrase I learned from Battle Cry), are pretty much nil

Oh, well. Maybe it will come out on DVD really fast, and I can get it on Netflix. I can’t wait.

By the way, that lucky dog Burl got to cover the premiere out in Hawaii. I am, needless to say, way envious. Here’s his report. 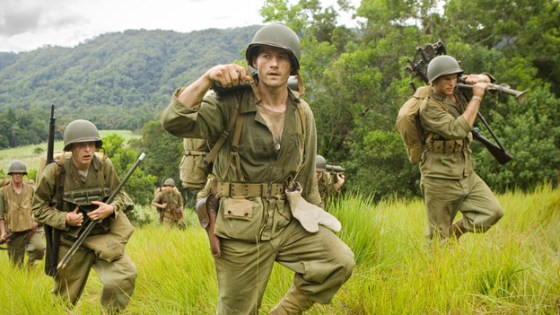