Now for my actual post based on my official interview with Tony Mizzell, who’s running against Leona Plaugh, Kevin Fisher, Mary Baskin Waters and Walter Powell Jr. for the 4th District city council seat being vacated by Kirkman Finlay III.

We talked about a lot of things, such as the fact that he really likes being able to run in a nonpartisan race for a change (he served on Richland County Council as a Democrat), his wish to try skydiving, the fact that his wife cried when he said he was going to run again (so would mine — either that, or slap me upside the head) and his regret that a picture I took of him once still pops up when you Google him.

Oh, we also got into the fact that we are sort of competitors, with him being a veep at Chernoff Newman and me working over at ADCO, which made his buying an ad from me even more interesting. By the way, he put some tracking code on the ad, and says he’s “real pleased” with the traffic he’s gotten from it — you other potential customers, take note.

But the core of our conversation at the Capital City Club (and if you ask why Tony got breakfast at the club when others didn’t, it’s because Leona wanted to meet out at Woodhill, and Kevin wanted to meet tomorrow kind of late for breakfast, and Mary Baskin Waters has yet another place she wants to meet — Tony left it up to me)….

Where was I? Oh, yes, the core of our conversation was his four-part platform. In the video above, you can see and hear him talking about the fourth point, which he considers (rightly, I think) the strongest argument for his candidacy. Here are all four:

That last point led to a discussion of consolidation — not just consolidation of various services (zoning and planning, he says, is a no-brainer), but total city and county government consolidation, which he (like Leona Plaugh) supports.

Here are some other things we talked about:

There was more, but don’t you think that’s enough. I’m at the ADCO office — I came back here after Holy Thursday Mass — hours after everyone left.

Sorry I didn’t get to doing a Virtual Front Page today, but I’m bushed. Tomorrow morning, I’ll be interviewing Kevin Fisher at 9 and Mary Baskin Waters at 11:30. Then there’s Good Friday services at 3, so it might be Saturday before I get those posts up. But I’ll do it as soon as I can. 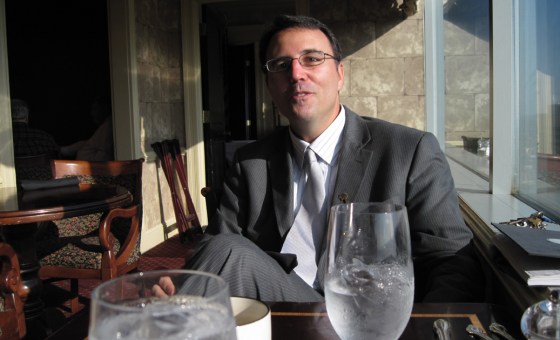