Side A of Frazier ad.

Side B of Frazier ad.

Here’s something you don’t see every day any more: Republican candidates vying to be seen as friends to public schools, and attacking other GOP candidates for supporting vouchers and such.

It’s certainly not unheard-of. GOP Reps. Bill Cotty and Ken Clark were great advocates for and defenders of public education. But you’ll notice that neither of them is in the House any more. Ken lost to a candidate funded by voucher advocates (although there were also some local issues that played into it), and Bill Cotty apparently just got tired of being targeted by those people every two years and having to answer their lies about him. There are Republicans who support public schools in the Legislature yet, but few who are willing to stand up as boldly, against such well-funded opposition, as Cotty and Clark.

And you’ll note that the GOP candidate you hear the most from in Cotty’s old district is his old pro-choice opponent Sheri Few — the one who goes on and on about how Anton Gunn is such a socialist.

Nowadays, your most prominent Republicans climb all over each other in competition to see who can come across as the biggest partisan ideologue, the biggest enemy of government and all its works, the biggest, most extreme hater of Barack Obama. Doubt me? Check out the Republicans seeking to become our governor.

But to my great delight, in my very own House district, we have a debate that is at least semi-reminiscent of Cotty and Clark. We’ve not gone in much for ideological extremism in District 69. Our current representative is the sensible, relative moderate Ted Pitts. And the smart candidates aim for that sort of tone.

In the last few days, though, things have gotten a bit heated. First, Danny Frazier attacked Rick Quinn, accusing him of being a closet voucher supporter — in other words, of being what Sheri Few or Nikki Haley would shout from the mountaintops. It painted him as a foul hypocrite and enemy of our schools for having done such things as calling a Mark Sanford-favored bill “a good step,” and for having taken money from out-of-state voucher promoters.

Mere days after I got that mailer, Rick fired back, making it clear that “I would NEVER support any scheme that would damage funding for our public schools.” He went on to say he would fight for better school funding, and to point out that not only is he a product of Lexington County public schools himself, but is sending his kids through the same system.

Some of you will recall that I toyed with the idea of running for Ted Pitts’ seat myself, on the UnParty ticket. And if the rules allow (I haven’t thoroughly researched it), I might still consider such a run if I don’t like the choices we have coming out of this primary. (There are three other Republicans running — Ernie Peagler, T.R. Parrish and Gary Taylor — and a lone Democrat, Jan Steensen Crangle.)

But for now, I’m enjoying the kind of debate I’m seeing between two of the candidates to represent me in the House.

Disclaimer: One of these guys is an advertiser on this blog. But you knew that. I mean, the ad is right over there… 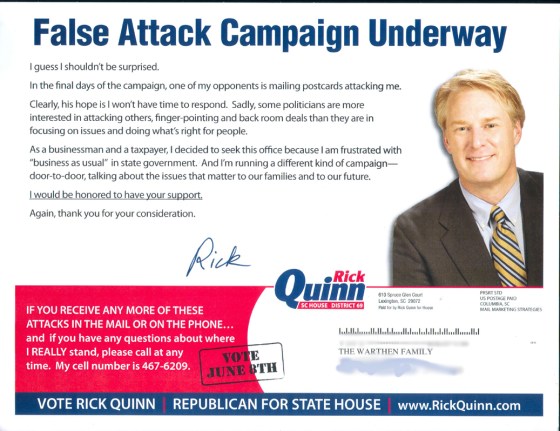 Quinn mailer, side A. 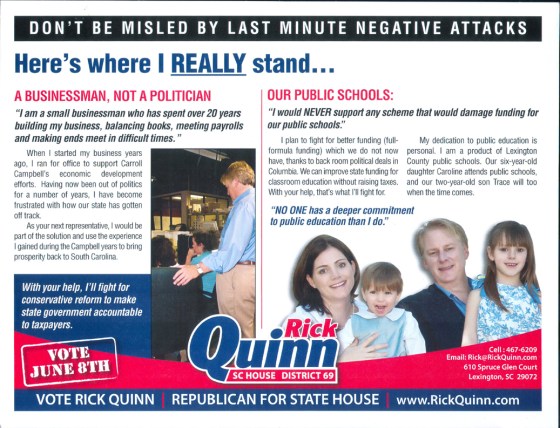 Quinn mailer, side B.

11 thoughts on “Here’s a nice change: GOP candidates arguing over which of them is the better friend to public schools”