Since the event on Friday, a number of people have raised the following question: How many people showed up for the Sarah Palin/Nikki Haley rally?

Well, gee, I don’t know. But I do think the published reports were off.

Here’s an e-mail I received from a reader:

It was good to read your post after you attended the Haley/Palin rally.  At a party tonight we were discussing the fact that the majority of us had heard on WIS TV and other TV news programs that 150 people attended the rally – none of us had.  But the State newspaper today said there were over 1,000 people at the rally – now that is a rather large discrepancy in the numbers.  Since you attended I am hoping you can clear up this question – the larger or smaller crowd?  I looked on Youtube but no video from the rally and The State’s video only shows a close up of Palin without a crowd shot.  Thanks for your time reading my e-mail.

Hope you are well.

We miss you at The State – we miss a lot from The State now.  Monday’s paper is laughable.

Here’s how I responded to that:

Thanks for reading. I think it was between those two numbers. I think 1,000 is too high, and I’m pretty sure 150 is too low. But I’ve learned from long experience that crowds are notoriously hard to estimate.

And that’s about as much as I know. All I know is that it was a very enthusiastic crowd. And from where I was standing, I couldn’t even see the protesters that featured so prominently in news reports. Others who were there were certainly aware of them, to the extent that Sarah Palin addressed them — but I couldn’t tell whether that was because they were actually so noticeable, or because she thrives on persecution by political opponents; it’s part of her idiom. Perspective — where one stands or sits and what can be seen or heard from there — is everything. I failed to do what I usually do at such events — get up on the steps and look down for an overview — partly because the people I was wedged behind had indicated that they would DEEPLY resent anyone who squeezed in front of them (some folks who had brought lawn chairs and camped out, and had a profound sense of entitlement as a result — they were, as Tea Partiers tend to be, very cranky about it).

Fortunately, Anne McQuary, a former photographer with the state, had done the usual thing, and had gotten a shot of a significant portion of the crowd. You can see it above. I asked Anne whether I could use it here, and she said yes, but only if I posted something else with it, because she regarded the crowd picture as boring. Hence the picture below. But for a better sense of Anne’s talents, check out her blog. I really liked some of the shots she got on the periphery of the crowd (including some of those protesters). Also, there’s her main business website.

By the way, Anne said she and her husband — whom she described as a “huge Palin fan” — estimated the crowd at between 300 and 500. I think they were right. 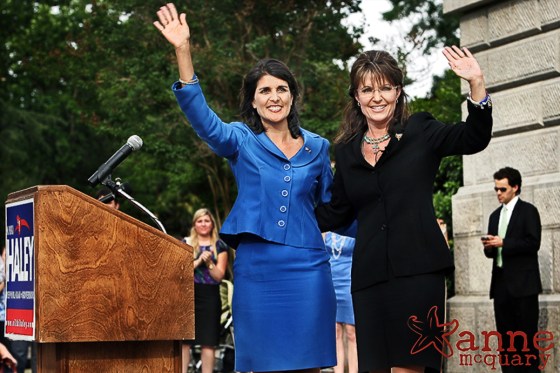 16 thoughts on “How many Palin/Haley fans WERE there Friday?”