Back on yesterday’s Virtual Front Page I made a passing reference to God the Creator. That inspired Phillip to respond:

The line in Genesis about God creating man in “His image and likeness” has troubled me since the day I first read it, as that idea seems to me to be a self-serving construct of man himself, which has in turn served to justify just about everything man has ever done, for ill as well as good.

To the extent that I believe in some kind of unknowable First Cause, I’d have to say that insofar as He-She-It created man in His image, He also created single-celled amoebae in His image, or igneous rocks, or airless space, or kangaroos, etc.

The whole Genesis thing implies that man is somehow the culmination of God’s creation, the highest plateau, which just seems dubious considering A) the blink of an eye which comprises the whole duration of man’s existence compared to the earth’s history, and B) the significant mathematical probability that highly intelligent and evolved life exists on other planets in the universe.

To which I respond…

Phillip, Genesis is evocative literature, albeit inspired. The “image and likeness” part is poetic language for the fact that we are creatures capable of contemplating good and evil, and choosing between them. Other creatures can’t, as much as we’d like to assign such moral values to them.

I had a reminder of that this morning. I got up to find that my dog — during the part of the night BEFORE he woke me up whining to go out — had gotten into the garbage and chewed and torn and spread it all over the kitchen and another room, in SPITE of the fact that I had put it in the cabinet under the sink and secured it with a big rubber band, specifically to keep him out of it.

He must have spent most of the night on it. I’m still not sure how he did it without opposable thumbs. I should have taken a crime scene photo to post here, but I wasn’t thinking straight.

As I was fuming and ranting cleaning it up, I was thinking (and saying aloud, though I was alone) how horrible and wicked, how thoroughly evil,  it had been for him to do this so deliberately. so painstakingly. Which was, of course, idiotic on my part.

I had put in the garbage a paper towel with which I had wiped a plate full of juices from a steak dinner. The smell must have driven him half mad.

And he’s just a dog. He’s just like all the other creatures in the Garden. But if a grown human who had been thoroughly warned about this — say, Eve, or that slacker Adam — did the same, I’d be rushing to get my flaming sword… 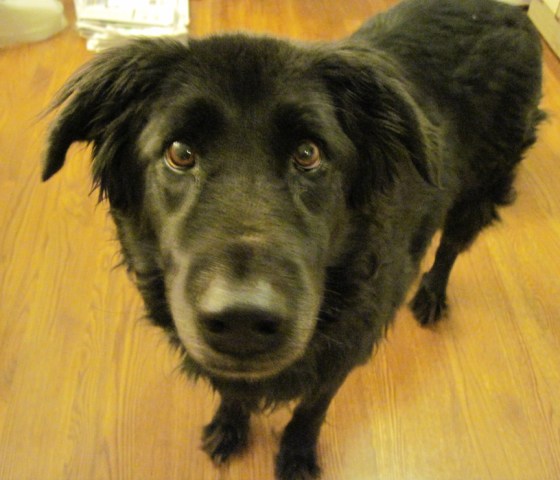 The prime suspect in this morning's thoroughly nasty crime. So far, there are no indications of an al Qaeda or Taliban connection, but this is early in the investigation.

5 thoughts on “My dog and the Garden of Eden”