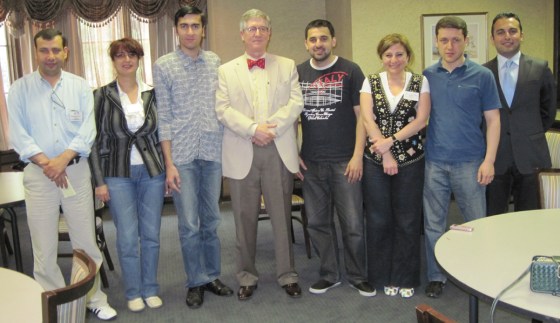 The six visitors and me at St. John Episcopal Church today. At the far right is our interpreter, Bahruz Balayev.

Specifically, I had the honor of speaking to a group of journalists from the Republican of Azerbaijan, which for you geography-challenged folk is located in the Caucasus, hence the bad pun.

They were visiting in connection with the Open World Program of the National Peace Foundation. Their local sponsors were Mary Bryan (whose daughter Chandlee follows me on Twitter, just to get a plug in) and Tom Kohlsaat, who traveled to Azerbaijan in 2006 where Mary worked with their friend Ann Furr to provide mediation training as part of a Rule of Law program funded by CEELI and OSCE. Also, Tom is currently providing technical support to a fledging conservation nonprofit in Azerbaijan.

But that’s not what I was there to talk to them about. I was there as a blogger with MSM experience to talk about new media, old media, and how to overcome the challenges facing both.

Of course, the “challenges” facing journalists in this country are pretty minor compared to what folks in that former Soviet satellite face. When Khalid Asif Kazimli mentioned that there are fewer newspapers and other news outlets in his country than there were six years ago, I rather superficially asked whether that was because of the financial challenges they face. He said yeah, that — and government suppression.

Another member of the group, Samira Bahadur Guliyeva, asked me whether it was more meaningful to be a journalist in a totally free country or in one that is less free, I told her that obviously, you have more of an impact when you are one of the few journalists in a country in which journalism is rare, and especially where it is officially discouraged and constrained.

I should have added, to all of them, that I have tremendous respect for them for being journalists at all in any country that lacks the legal, political and cultural protections that we take for granted in this country. They are far braver than I am.

It was an honor and privilege to meet them. Here are excerpts from the profiles of the group I spoke with:

2 thoughts on “Visitors from Azerbaijan”