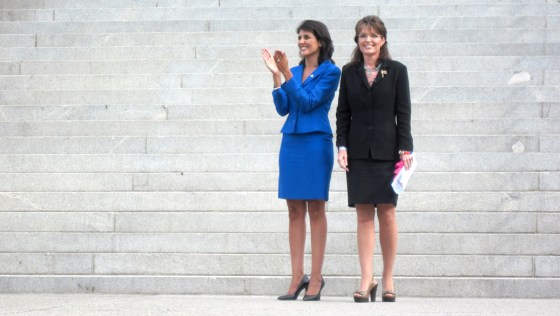 Sorry not to be forthcoming with a post on the Sarah Palin/Nikki Haley event last evening. I’ve been too busy — my baby granddaughter spent the night with us last night, my youngest daughter came home from Charlotte and my wife and I had a lot of errands to run this morning (including, alas, taking her car in for several hundred dollars worth of repairs).

So I was living life instead of blogging. But I should add that I was glad I couldn’t post right away, because I’ve been… depressed… since that event. As I’ve turned over what to say about it in my minds (I almost corrected that to the singular after typing the S, but then realized that plural is correct; I am of several minds on all this), I’ve been unable to think of anything constructive to say. And even when I’m going to be scathingly critical of something, I want it to be for a purpose. I want there to be a constructive point in mind, something to add to a conversation that would help us all move forward somehow.

But I haven’t arrived. Instead, I’m feeling a level of alienation that would make Benjamin Braddock and Holden Caulfield seem happy and well-adjusted.

Part of it, but just a small part, is this problem I’ve been wrestling with of my increased sense of alienation from Republicans in general. I don’t like it; it runs against my grain. To react with constant negativity to Republicans and all their works suggest partisanship, an affinity for Democrats, to most people. Not to me — Lord knows, I still find the Democrats off-putting enough, and am still pleased not to identify with them either — but to other people. And when you write a blog, how you are perceived by others matters. But I can’t help it. While the Dems are merely no more irritating than usual these days, the Republicans have so aggressively, actively offended my sense of propriety and my intelligence as they have flailed about since the 2008 election, that even tiny things set me off now. I no longer have to see one of those maddening TV commercials — like the two I saw last night, Andre Bauer talking first and foremost about the need for smaller government (as if THAT were the main problem facing a state that’s laying off teachers left and right) and Henry McMaster talking about the “radicals” running Washington (as if that were any less crazy than the claims of the birthers). Now, just small things send me deeper into my funk. This morning I saw a sign for a candidate who had only one thing to say about himself, that he was a “Rock Solid… Republican” — as though that identification were sufficient, that reassurance that I am not one of them; I’m one of us. The sheer, obnoxious, impervious smugness of it…

(If I were a Democrat, I wouldn’t worry about this. They can console themselves with the fantasy that all they have to do is win the election, and their troubles are over. I’m always conscious of the fact that as many as 40 percent of voters would still be Republicans — just as between 30 and 40 percent are Democrats now, even with a Republican governing majority — and you’d still have to deal with them and reason with them if you really want to move our state forward. Especially in our Legislative State, you sort of have to build consensus to get things done. So when either party seems to be trying to drift beyond reason — say, when Dems were in the grips of Bush Derangement Syndrome — that worries me.)

But the alienation I’m feeling standing in that crowd of Haley and Palin supporters is different. Partly because these women aren’t positioning themselves as Republicans. On the contrary, they are relishing their animosity toward the people in their party who already hold a majority of public offices in this state. They are proud to antagonize and run against those Republicans with greater experience and understanding than they have. They turn their inexperience and lack up understanding of issues from a weakness into a virtue. Their fans cheer loudest when they hold up their naivete as a battle flag.

A little over a year ago, Nikki Haley was just an idealistic sophomore legislator who was touchingly frustrated that her seniors in her party didn’t roll over and do what she wanted them to do when she wanted them to do it. It didn’t really worry me when I would try to explain to her how inadequate such bumper sticker nostrums as “run government like a business” were (based in a lack of understanding of the essential natures not only of government, but of business, the thing she professes to know so well), and she would shake her head and smile and be unmoved. That was OK. Time and experience would take care of that, I thought. She was very young, and had experienced little. Understanding would come, and I felt that on the whole she was still a young lawmaker with potential.

I reckoned without this — this impatient, populist, drive for power BASED in the appeal of simplistic, demagogic opposition to experience itself. It’s an ugly thing, this sort of anti-intellectualism of which Sarah Palin has become a national symbol. This attitude that causes her to smile a condescending, confident smile (after all, the crowd there is on HER side) at protesters — protesters I didn’t even notice until she called attention to them — and tell them that they should stick around and maybe they would learn something. If a 65-year-old male intellectual with a distinguished public career said that to a crowd, everyone would understand it was ugly and contemptuous. But Sarah is so charming about it, so disarming! How could it be ugly?

Her evocations — echoed by Nikki — of traditional, plain values (and complementary exhibition of contempt for anyone who disagrees) seem so positive and good and right to the crowd that cheers such lines as Nikki’s about how good it is that traditional politicians are “afraid” (which, coming from different lips, would send a chill down spines). They don’t see the ugliness. After all, see how lovely the package is! See how they smile!

The thing is, I probably agree with these people about so much that they are FOR — traditional moral values, hard work, family, patriotism. And mine isn’t your left-handed liberal kind of patriotism (you know, as in “I oppose the war and criticize my country because I’m a REAL patriot,” etc.). No, in fact, my own kind of patriotism is probably even more martial and militaristic than that of these folks, if that’s possible, given my background. And I would never take a back seat to any of them in my belief in American exceptionalism. I may not like the smug way they talk about these things, but the values are there.

It’s the stuff that they’re AGAINST that leaves me cold. Paying taxes. Government itself. Moderation. Patience with people who disagree. Experience. Deep understanding of issues. They are hostile  to these things.

And their certainty, their smugness, is off-putting in the extreme.

But as I stood there in that crowd and listened to the cheers at almost every questionable statement those smiling ladies muttered, I despaired of ever being able to explain any of this to these folks, of ever having a meeting of the minds. It’s THEIR alienation that makes me feel so alienated…

And that’s what has me down. I hope it will pass. But it wasn’t a good way to spend a Friday evening.