On the day of the Republican presidential primary in January 2008, I dropped by the office to check on things, and wandered through the newsroom to see what they knew, if anything.

I was wearing one of those “I Voted” stickers that the Palmetto Project gives out to encourage civic engagement. I’ve always proudly worn one on election days as a visible symbol of being one who cares enough to make the effort, without revealing anything 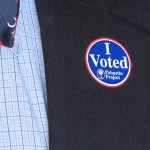 inappropriate (for a newspaper editor) about how I voted.

But John Monk remarked upon it, saying, “I see you voted Republican.” Dang! I had completely forgotten the insane fact that the parties had insisted upon having separate primaries a week apart (yet another reason to hate parties). Flustered, I just said, “Well, of course I did.” If I had thought there was any danger of Barack Obama losing the Democratic primary, I would have had a dilemma on my hands. But while I thought McCain would win the GOP contest, I wasn’t sure of it, and I was damned if I was going to fail to do my bit to prevent my state from committing the travesty it had in 2000, when it gave George W. Bush to the world. It just had never occurred to me not to vote in that primary.

Of course, if you live in the Quail Hollow precinct in Lexington County, you’re accustomed to voting in Republican primaries, if only because that’s the only way you get any choices at all. This morning when I asked for a Democratic ballot, I could not remember ever having done so before since I’ve lived there.

And of course, as a result of taking that ballot, I was disenfranchised in terms of who will be my congressman, my lieutenant governor, my treasurer, my attorney general, my SC House member, and my county councilman. In every one of those, there was no Democratic contest, and in two of them (treasurer and county council) no Democrat at all; in those two this WAS the election (and in several of the others it might as well be).

But it was worth it to cast a positive vote. Yeah, I guess I could have held my nose and hoped that Henry McMaster would govern the way he has served as attorney general, rather than the way he has run as a candidate, and thereby minimized Nikki’s margin of victory. But by taking a Democratic ballot, I actually got to vote for someone I actually want to be my governor, without any reservations. And as I’ve said over and over again, electing the right governor is FAR more important than what happens with any other office. We have got to turn this state around, and as weak as the office of governor is, it’s the one office with a bully enough pulpit to make a difference. No matter how perfect my House member may be, he’s just one vote out of 170, and can’t make news (and thereby influence policy) with a mere word.

3 thoughts on “I disenfranchised myself for ONE positive vote, and it was worth it”