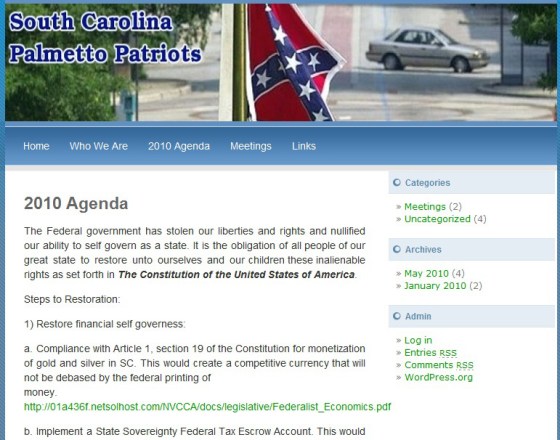 “Nikki and the neo-Confederates”… Hey, THAT could be a name for my band! Kind of Katrina-and-the-Wave-ish. I wonder if Nikki would agree to front us?

The Federal government has stolen our liberties and rights and nullified our ability to self govern as a state. It is the obligation of all people of our great state to restore unto ourselves and our children these inalienable rights as set forth in The Constitution of the United States of America.

You think maybe I’m kidding when I say the GOP this year has spun so far out that the worst thing you can call a Republican candidate, in his estimation, is a “moderate?” All four gubernatorial hopefuls dutifully sat down and earnestly answered this group’s questions. Did they do that for any group that YOU belong to?

I didn’t watch all of it. I couldn’t. But if you want to here’s the link. And here’s the first clip from Nikki’s interview:

35 thoughts on “Nikki and the neo-Confederates”