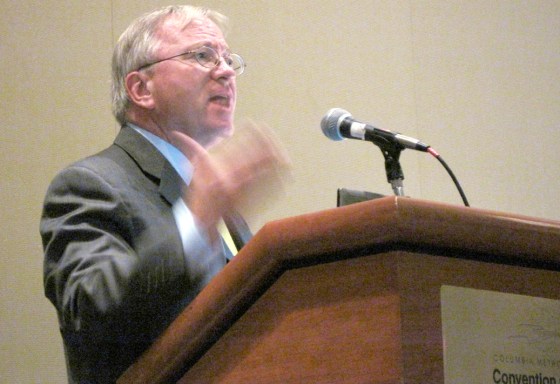 Went to the Midlands Aviation Summit today at the convention center, which was the community’s chance to hear airport consultant Michael Boyd of Boyd Group International (above) assessing the state of, and future prospects for, Columbia Metropolitan Airport.

As you can see below, there was a pretty decent turnout of concerned folks. They ran the gamut from professional ecodevo types from the Chamber, the Midlands Alliance and Midlands Authority for Conventions, Sports & Tourism to business travelers with a beef about the cost of parking at CAE.

Some main points from what he said:

On that last one I had to challenge him. When he said “Nobody cares about the cost of parking,” several people around me muttered, “I care.” I told him that, and also told him that I hear all the time from people who have run the numbers, and come out ahead paying for the gas to drive to Charlotte and park there. I added that even if it didn’t make sense, even if it were totally irrational, it would still be a real problem we had to deal with. Airport Executive Director Dan Mann told me afterward that he gets it. Perception is reality.

(It occurs to me that next time local governments want to invest money in boosting air travel, rather than starting an airline, maybe they could help the airport lower those parking costs. I realize it’s based on the need to pay for the capital investment, but maybe there’s some way to restructure the debt. Or something.)

On the lower pricing in Augusta and Florence… I was glad someone brought that up, and somewhat disappointed he couldn’t tell us why that was the case. But it occurs to me that there must be some reason, his joke about the illogical nature of pricing aside. And if we could find out that reason, and apply it here, it would help.

Based on what Mr. Boyd said and a brief conversation with Dan Mann after the presentation, the thinking seems to be that Columbia’s best chance for expansion of air service lies with Delta, not USAirways. So our local economic developers in the air transportation field are likely to be looking more to Atlanta, less to Charlotte. 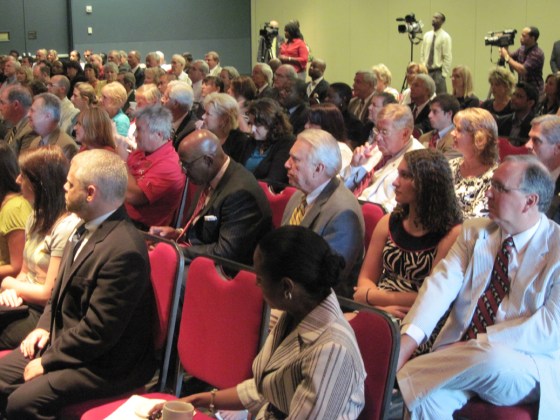