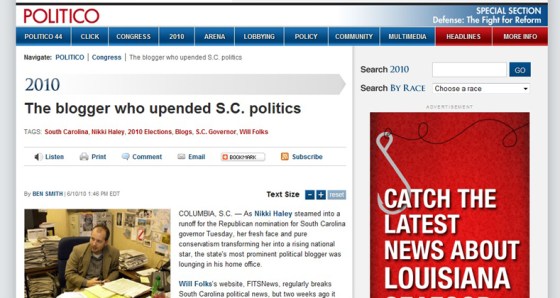 Monday night, as I was resting up before election day, I got an e-mail from Ben Smith at Politico asking for an interview the following day — about Will Folks and the Nikki Haley story.

I said OK, and called him next morning on the Blackberry as I was driving to my polling place to vote. I was a little distracted during the interview because I was hunting for my polling place (sometimes it’s at the John Deere place on 378, sometimes at the church across the road — and I mistakenly went to the Deere place first as we spoke), but he seems to have extracted a couple of tidbits worth using.

Nothing I haven’t said before here, I don’t think. But y’all might find the piece interesting. It’s fairly long — which means that Polito has now published more about Will Folks than my old newspaper did this morning about Alvin Greene. Sigh…

It’s called “The blogger who upended S.C. politics.” Which you know Will’s gotta be digging.

5 thoughts on “The Politico profile of Will Folks”