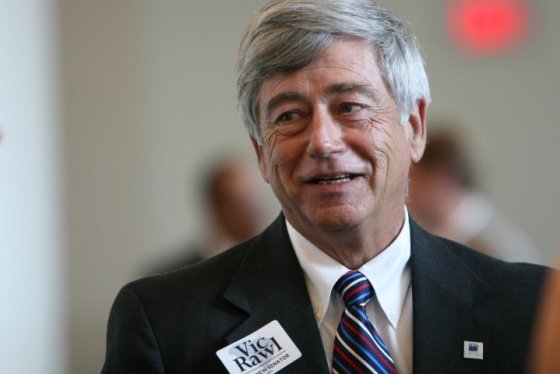 Photo of Vic Rawl from his Facebook page. I mean, I THINK it's Vic Rawl. It's HIS Facebook page so it's gotta be him, right?...

Vic Rawl had a press conference down in Charleston today — yeah, like I’ve got time to run down to Charleston — to announce that his erstwhile campaign has filed an official protest of his bizarre defeat by Alvin Greene in the Democratic primary for U.S. Senate. Here’s his statement:

STATEMENT OF JUDGE VIC RAWL
June 14, 2010
Good afternoon, and thank you all for coming.
Earlier today, our campaign filed a protest of last Tuesday’s election results with the South Carolina Democratic Party.
We have filed this protest not for my personal or political gain, but on behalf of the people of South Carolina.
There is a cloud over Tuesday’s election. There is a cloud over South Carolina, that affects all of our people, Democrats and Republicans, white and African-American alike.
At this point, the people of our state do not have the basic confidence that their vote will be counted.
The strange circumstances surrounding Tuesday’s vote require a thorough investigation. For better or worse, this protest process is the only platform currently available for that investigation.
And let me be clear: regardless of the outcome of this protest, a full and unblinking investigation of this election and the overall integrity of South Carolina’s election system must go forward. Whether our protest is upheld or not, I intend to bring my full energies to electoral reform well into the future.
I want to speak briefly about the bases for our protest.
First is ongoing analyses of the election returns themselves, which indicate irregularities.
Second are the many voters and poll workers who continue to contact us with their stories of extremely unusual incidents while trying to vote and administer this election.
These range from voters who repeatedly pressed the screen for me only to have the other candidate’s name appear, to poll workers who had to change program cards multiple times, to at least one voter in the Republican primary who had the Democratic U.S. Senate race appear on her ballot.
For those who experienced problems voting, I urge you to go to our website, www.vicrawl.com and use the form there to report them. You can also call our Election Integrity Hotline at 843-278-0510.
Third is the well-documented unreliability and unverifiability of the voting machines used in South Carolina.
It is worth noting that these machines were purchased surplus from Louisiana after that state outlawed them.
The full details of our protest will be presented on Thursday.
For the people of South Carolina, getting to the bottom of Tuesday’s results will build confidence, either way.
I also hope that a full and frank discussion of our voting system will result in substantial reform.
At the risk of repetition, this protest is not about me, or my personal political fortunes. Indeed, if the protest is upheld and a new election ordered, I have not decided whether to run in it.
But, either way, I am not done with the issue of fixing our elections.
Lastly, let me make something clear. Like all of you, I am aware of the controversies surrounding Mr. Greene. This protest is not about him either.
I would like to speak directly to Mr. Greene and say: “Sir, this is not about you, and it’s not about me. I wish you and your family nothing but the best in the weeks and months ahead.”
I will be happy to take questions.

Yeah, I’ve got a question, which I would ask if I were indeed in Charleston: What’s YOUR explanation for how this happened? You keep saying it’s not about you, but isn’t it, to some extent? Don’t you share some of the blame? I mean, I admit that I share some blame, for not voting in that race. But maybe if you’d been a little more visible, I would have voted for you. Maybe.

Anyway, we’d all like to get to the bottom of this. So protest away, by all means.