As I’ve been saying to anyone who asks, the nomination of Alvin Greene is a failure with enough blame to go around to everyone. The voters, of course (as politically incorrect, as anti-democratic, as it is to blame the precious voter). The Democratic Party. And definitely the media — both MSM and the vaunted, tell-you-everything (according to the hype) blogosphere. Apparently, bloggers were too busy telling you who they’d slept with to check out who the hell this guy was. (And yes, I include myself — not on the kiss-and-tell part, but on the not-checking-out-Alvin part.)

As for the MSM — well, it’s awfully easy to beat up on them on this. And they deserve it. That is NOT to blame the reporters and editors who are busting their butts trying to get the job done with grossly inadequate resources. It’s to blame the media as institutions that have failed as businesses to stay viable enough to do their jobs properly. Sound self-interested, since the failure of newspapers is why I don’t have a job with them any more? Well, yeah. But as a former newspaper exec, and an editor for three decades, I know whereof I speak.

True, newspapers have long ignored noncandidates. And they have long ignored, to a lesser extent, primary races to nominate a sacrificial lamb to go up against an invulnerable incumbent. Not because that was the right thing to do, but because when you’re covering scores of races, you have to set priorities, and the hotly contested ones get most of the ink.

But that traditional bias against the boring has been exponentially exacerbated by the emptying of newsrooms via the layoffs of recent years. Now, it’s not a choice; some important races simply are not going to be covered.

This year, you pretty much had to be in the governor’s race to get the media’s attention. And even then, if your name wasn’t Nikki Haley, it was hard to get free media. After he withdrew from the race several months ago, Dwight Drake told me that he had expected it to be hard to raise money (and it was so hard for him that that’s why he quit). But what surprised him was that the media was not to be found. As an old political hand, he was stunned at the lack of coverage.

But still. For none of us — not even people like me, who TRY (but often fail) to keep up with as much of it as possible — to know anything about this Alvin Greene guy is just outrageous. At the very least, even if this noncandidate was ignored, Vic Rawl should have gotten the minimal coverage necessary to give him the name recognition to win. But he didn’t.

OK, so at any rate, at least the media has jumped all over this story now, right? Mr. Greene has TV crews chasing 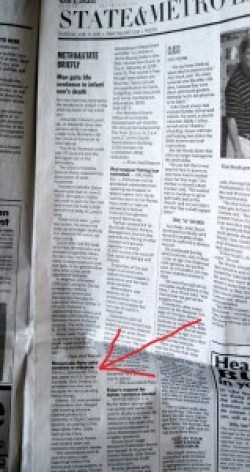 him. Mother Jones had a story about him on Tuesday (a day earlier would have been nice, but then it’s not Mother Jones responsibility to inform SC about its own candidates). Everywhere I go, people are asking about him. “All Things Considered” called me this morning to get my thoughts on how all this happened.

Well, yes and no. Yes, he’s getting a lot of coverage now. But… and I really hate to say this about my old paper, because I love it and wish my friends still there all the success in the world … The State was weirdly negligent on the story in today’s paper.

When I read my paper this morning, it was the first thing I looked for. On the front page, of course — that’s where I put it. But it wasn’t on the front page. OK, on the Metro front — nope, not there. OK, so it’s packaged with the jump of another election story… nope. All right, back to the front page, to read the cutesie “winners and losers” story that I had initially bypassed about all the quirky little water-cooler talker stuff from the primary. I mean, it’s weird that this didn’t TOP that story if it was in it, but maybe it’s down farther… nope.

I gave up at that point, because I needed to leave to keep my appointment at ETV. But bewildered, I searched the paper again after lunch… and finally found it as a brief on page B3. Not in a roundup of election briefs, but just generic Metro & State briefs. It wasn’t even the first item. It was below a crime brief. As for the content, it was essentially the same brief I had seen on the Web site the day before.

I’m sure the paper will have more complete coverage of this tomorrow, and play it better. Even in the good old days of full staffs, things tended to be disorganized on the day after all-out election day coverage. I see Clyburn’s intimation that it’s all a foul GOP plot is getting some play at thestate.com now.

But I was really disappointed this morning.

17 thoughts on “Where was The State on Alvin Greene TODAY?”