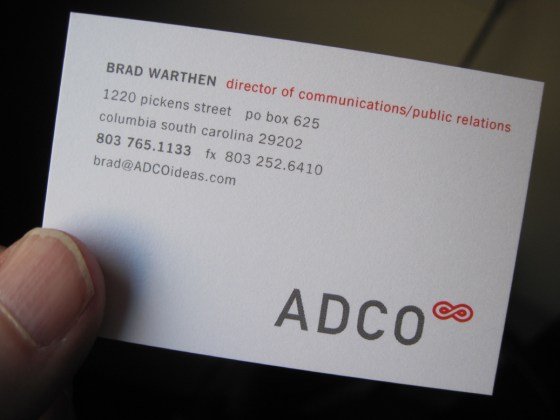 Where does Superman go when he’s not saving Lois and Jimmy? Well, sometimes he’s hammering out a story for Perry White in order to uphold his cover. Sure, he can write at super-speed, but not when others in the newsroom are watching. And sometimes they must see him being Clark Kent to believe in that identity.

So it is with me. I can’t blog ALL the time, and sometimes I’m actually working for a living.

Yes, indeed, and you shouldn’t be so shocked. I have been known to do work frequently. I even used to do it when I was with the newspaper, even though I was “in the newspaper business, where it is such an important part of the ethics that you should never seem to be working,” as Jake Barnes so rightly noted.

What am I doing now? Well, I’m in the ad game. I’ve joined ADCO, a full-service advertising and marketing firm here in Columbia. I’ve been ADCO’s director of communications/public relations for quite some time now. I joined in mid-February.

So why haven’t I mentioned it before? Well, it’s not like I’ve made a secret of it. I’ve announced it in some public forums, such as when I’m speaking to civic groups (they gave me a big hand at Rotary when I told them, probably because they were thinking, “Never thought he’d get a job.”). But mostly I haven’t done it because ADCO is undergoing a lot of very exciting changes (see how I’m learning the flack lingo?), and I sort of wanted to wait until all the pieces were in place. There are three big things happening with ADCO as I type this:

The Period Three — that is to say, ADCO Interactive — team has been working on a new Web site that will incorporate all of these changes. For instance, if you go look at the old site, you won’t find me or any of the new Interactive folks. The new one goes live in a couple of weeks. So I haven’t wanted to refer you to it until all that was ready.

Also, if I told y’all I had a job, I’d have to go rewrite my lede on my “About” page, and I haven’t thought of anything I like as much as “Brad Warthen is an unemployed newspaperman, until he finds something else to be.” It’s way existential. I think it ranks up there with “We were somewhere around Barstow on the edge of the desert when the drugs began to take hold.” Or “It is a truth universally acknowledged, that a single man in possession of a good fortune must be in want of a wife.” Or “It was the best of times, it was the worst of times…” You get the idea.

But what the hey; I’ll worry about that later. I thought I’d go ahead and scoop the new ADCO Web site, if only by a bit.

By the way, to address what I’m sure you’re wondering about, this is just like “Mad Men.” Except that as I type this in my office, I’m drinking a Samuel Adams Summer Ale rather than a martini (I am not making this up — Gene and the gang are celebrating the fact that ConvergeSE happens tomorrow, and I “just happened” to step out of my office just as they were opening a few bottles in the corridor). And I’m the only one who dresses like it’s 1962. In fact, one of the Web gurus here for ConvergeSE just said “nice tie” to me in the hall — and it’s really not one of my nicer ties (hey, I know when these hepcats are being ironic; I’m way perceptive). And if you ask one of the young women in the office to fetch coffee, she just doesn’t hop to it the way they do for Don Draper. I figure I’m not saying it with the right tone or something.

But other than all that, it’s just like “Mad Men.” And I’m really getting into it.