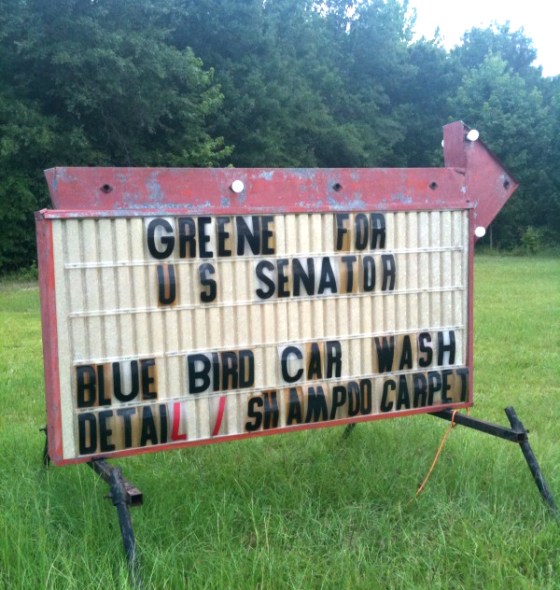 First, this photo, which may or may not be legitimate; I have no idea. It was brought to my attention by Scott English, Mark Sanford’s chief of staff, via Twitter. He got it from the Washington Examiner. PhotoShop or reality? Either way, it’s a primo example of the current rage in political comedy, the item that allows us all to sneer at Alvin Greene. (Speaking of PhotoShop: I not only cropped the picture before posting it here; I also lightened it up and increased the contrast. We have standards here at bradwarthen.com.) The knee-slapping cutline that came with the picture:

This sign is from US 521, near Greene’s hometown, and hotbed of support, in Manning, SC.  No signs for Republican Sen. Jim DeMint were spotted anywhere near the area, suggesting that Greene has opened an imposing lead in the early-advertising race.

Which brings me to my second point: At what point does mocking Alvin Greene simply becoming mocking a man for being poor, black and unemployed and from a small town in South Carolina? At what point do the Republicans who are LOVING this, or the mortified Democrats who hide their faces in shame that THIS is their nominee, or smart-ass bloggers who post satirical photos (real or fake; irresponsible bloggers just don’t care, do they?) get called on the carpet for the so-far socially acceptable practice of running down Alvin Greene?

Food for thought, there…