So it is that you have Henry’s ridiculous “Vultures” ad. And with Nikki Haley, it pretty much seeps into everything she does. For instance, a routine release from her campaign yesterday began:

Friends,
Across this country, we’re seeing people waking up and taking their government back.  We certainly saw it in South Carolina last month …

Now let’s set aside the ridiculous demagogic “taking their government back” construction, which makes zero sense. I mean, really — give us some examples of these instances you refer to, because I’d like to see what this business of “taking back government” looks like, how it plays out in the actual world, what sorts of results it produces.

But things like that actually almost make sense set against the paroxysms that have been engendered by a campaign contribution made to a South Carolina congressional candidate by Nancy Pelosi. Various Republicans have today gone wild over this. They just can’t believe their good fortune. Instead of having to play their usual game of pretending that South Carolinians like Vincent Sheheen and John Spratt are liberals in the modern meaning of the term, they actually have an actual liberal touching South Carolina politics. So of course they are jumping up and down with joy and making mighty mountains out of Nancy’s molehill. They are ecstatic, and like many people who are beside themselves with happiness, they have gotten rather silly about it. For instance:

Which means people are actually giving actual dollars in response to this utter nonsense. What kind of a sap do you have to be to fall for this flapdoodle?

Now as y’all know, I have no truck with folks interfering in the politics of other people’s states. When folks from here get worked up about elections elsewhere that are none of their business, I call them on it. So for the record, I’d greatly prefer that Nancy Pelosi stay the hell out of our South Carolina elections. Of course, there are levels of egregiousness in outside interference. Speaker Pelosi acting in a fairly modest way upon her desire to keep a majority so that she can keep her job is unseemly. Howard Rich pouring a fortune into South Carolina, not for a national issue, but in an effort to impose his ideology upon the South Carolina Legislature, is an outrage. That distinction made, we can do without your involvement, Nancy.

But the really interesting thing here is the way Republicans overreact when they finally, finally get the smallest excuse to make a South Carolina contest about national politics. Since they have no ideas for helping South Carolina move forward, they invariably fall back on the Washington boogey man. And when a prominent Democrat actually plays along with their narrative, they are absolutely thrilled. 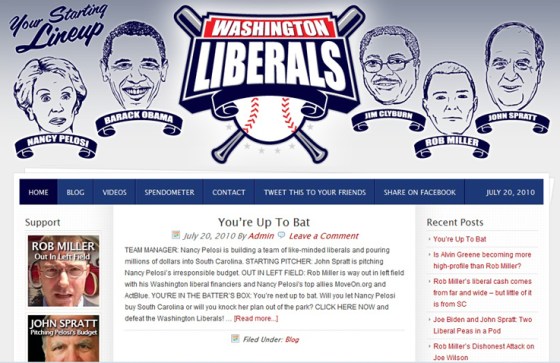