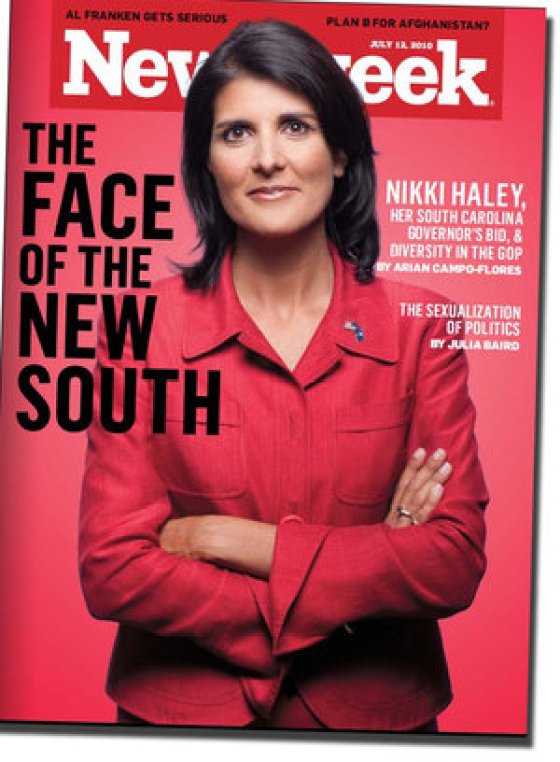 Oh, you say it’s not an endorsement? Don’t bore me with semantics. As I said, the national media — not giving a damn one way or the other about South Carolina, or about who Nikki Haley really is or what she would do in office — is enraptured at the idea that South Carolina will elect a female Indian-American (Bobby Jindal in a skirt, they think, fairly hugging themselves with enthusiasm), which just may be the most extreme example of Identity Politics Gone Mad that I’ve seen.

I told you we would have to expect this. And this is just the beginning.

This actually goes beyond an endorsement. This is a declaration that this woman IS our future. She IS the Face of the New South, and no one dare say her nay, least of all that — what’s his name? — the Democratic nominee. You know, the Catholic Lebanese-American — but who cares about that, right?

And if you think their excitement about her goes any deeper than that, you are not very familiar with the MSM.

But we are the ones who will have to live with what the national MSM is trying to ordain, the narrative that they have adopted and are extremely unlikely to deviate from. She may have come to their attention as the result of alleged scandal, but the narrative has adapted that as merely an example of how far the Dark Atavistic Forces of Reaction will go to stop their new darling.

The only good thing about this is that the national media is so ubiquitous that someone out there will raise questions. They will say, OK, if those allegations were lies, why doesn’t she — the supposed champion of transparency — want to release her public e-mail records, but instead hides behind an exemption to DUI law specifically carved out to protect lawmakers (you know, those awful Bubbas who fight so hard to resist transparency!). Or maybe they will take a look at those videos in which she obsequiously courts the neo-Confederate vote. Or maybe they’ll ask what other little consulting deals she might have had aside from that $40,000 from a company wanting access to her “good contacts.”

But those won’t make the headlines. They won’t supplant or derail the master narrative.

Newsweek has staged its coronation. Watch for other media to follow.

31 thoughts on “The Newsweek endorsement of Nikki Haley”