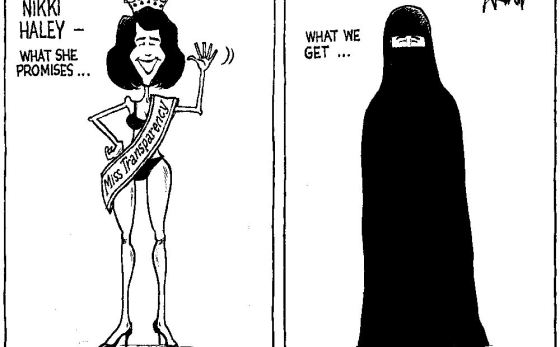 In fact, it’s quite awesome.

I missed it when Robert put it out week before last, and I’m glad it’s been called to my attention now. It’s hard to imagine a more pointed evocation of exactly what’s wrong with Nikki Haley. Or one of the things wrong with her, anyway.

What might be harder to imagine, to a sensible person who understands the concepts of satire and the idioms of topical visual communication, is the controversy it engendered.

It wasn’t all that much, of course. Just intimations that he was essentially calling her a “raghead.” Or check this one out, helpfully headlined, “Reminder: Nikki Haley is a Secret Muslim Whore.” An excerpt:

Now, just a month after Haley’s victory, one Republican cartoonist has emerged from his gutterto dredge up the same vile race-baiting and sexism that failed to derail her primary campaign. In a cartoon published Tuesday (pictured above), Robert Ariail portrays the Indian-American gubernatorial candidate as a bikini-clad pageant queen in the first panel and a niqab-clad Muslim in the second.  The cartoon explicitly echos previous race-, religion-, and gender-based attacks against Haley, a practicing Methodist raised in the Sikh tradition by her immigrant parents.

Ariail depicts Haley as a radical Muslim posing as an all American pageant contestant so she can put one over on voters.  He claims that’s totally different than when State Senator Jake Knotts described Haley as “a raghead that’s ashamed of her religion trying to hide it behind being Methodist for political reasons.”

All utter … let me think of a nice word… nonsense. An ironic side note: Robert’s used to getting this kind of … nonsense… from the left, so at least this is a change of pace, reflecting the extreme right’s recent and sudden discovery of the power of Identity Politics.

Silly as it all was, Robert was nevertheless asked by a local TV station to account for himself, which he dutifully did:

The cartoon on Ms. Haley is, I think, pretty straight forward: It contrasts her campaign’s message of open government and transparency ( which I support ) with her recent closed-door meetings, her refusal to release House e-mail accounts and her explanations on consulting fees and what she did to earn them. The cartoon is neither salacious nor an ethnic or religious slur. I came up with the idea of her as “Miss Transparency” wearing the title sash and bikini and chose the burqa as the best clothing metaphor representing the opposite of transparency. The burqa is a visual metaphore I’ve used before to make similar points. It is not about Ms. Haley’s religion- after all, she was a Sikh, not a Muslim, before she became a Christian. Anyone who claims this cartoon is an ethnic or religious slur is deliberately misconstruing its simple, issue-oriented meaning.

I appreciate Robert’s extreme patience in providing this “hold-you-by-the-hand-and-explain-the-obvious” explication, but it almost ruins the cartoon for me that he had to. Explanation is death to comedy. And if there must be an explanation, I prefer the one that Robert suggested to me when I told him this morning I might post something about the foolishness that some chose to read into the cartoon. He suggested that I tell y’all, “Robert’s not thinking about s__t like that” when he does his thing. Please excuse his technical newspaperman jargon.

My message is, this is everything a cartoon should be: It makes an excellent political point that needs to be made, and it provides a laugh along the way. Good job, Robert.

Oh, one other thing. Today Wes Wolfe raised a new question about the cartoon (which is what got me to thinking about it): After saying that “After discussing the piece with friends, we decided that was perhaps not the best way to go” (which suggests to me he might need some new friends), Wes suggested that the cartoon may have had something to do with Robert parting company with The Nerve, the S.C. Policy Council Web pub Robert had done some cartoons for recently — since, you know, Nikki’s their kind of gal.

Well, that seemed unlikely to me, and Robert confirms: When you go back to work for the MSM, you can’t still be associated with what is essentially a propaganda entity. It’s just not a good fit. So he chose, wisely, the Spartanburg paper over The Nerve — and those folks understood, and they parted on good terms — as Wes notes. And now Robert’s back doing what he ought to do.

Finally, a bonus: Robert’s gotten into hot water over burqas before, ALSO over a hilarious, pointed cartoon that had absolutely nothing wrong with it. It was the one making fun over the controversy in the Legislature over young female pages being dressed too provocatively. The hoo-hah over that one at least led to something good — a conversation between me and Robert about how everybody seemed to be after him with the torches and pitchforks, which in turn led to the cover of his last book.

Anyway, for your enjoyment, a look at that earlier “offensive” cartoon: 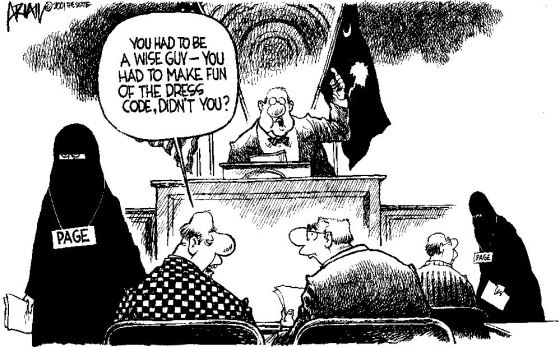 29 thoughts on “There is nothing wrong with this cartoon”