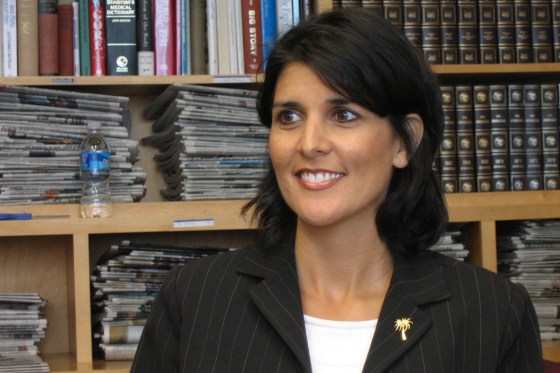 Turning from Nikki Haley’s foot-dragging on transparency regarding her taxpayer-issued computer and e-mails, let’s take another look at her problems with paying her taxes on time.

This is particularly relevant because of her oft-stated wish that government be run like a business, and her touting of her proven skills as an accountant.

Let’s take a look at Cindi Scoppe’s column Sunday. Cindi, a meticulous reporter if ever I’ve met one, didn’t think much one way or the other about Nikki’s failure to pay her taxes on time until she looked into it further herself. Here’s an excerpt from what she found, going well beyond what had been previously reported:

The problem wasn’t that the Haleys sought and received extensions. It is in fact quite common for people to get a six-month extension to file their tax returns. But as the IRS makes clear, the extension applies only to the return, not to the tax payment itself. Taxes are always due by April 15 — at the latest. The Haleys have not paid their taxes by April 15 in any of the past five years…
Even more significantly, the extension gives people only until Oct. 15 to file. The Haleys filed their 2005 tax returns on July 30, 2007 — eight months after the extended deadline. They filed their 2006 tax returns on July 23, 2008 — also eight months after the extended deadline. Their 2007 returns were filed Nov. 5, 2008, just a few days after the extended deadline. (Their 2004, 2008 and 2009 returns were filed after April 15, but before Oct. 15, so the IRS doesn’t consider them late.)
Now, in my book, anytime you have to pay the government a penalty, you’ve done something wrong, and the Haleys have paid the IRS $4,452 in penalties in the past five years — $2,853 for filing late, and $1,599 for paying late…
Still, the idea that paying your taxes late, and waiting eight months after the extended deadline to file a return, is doing “nothing wrong” is more of a stretch.
But the biggest stretch is the way Ms. Haley has sought to spin her income tax problem into a virtue. She talks about how she and her husband fell upon tough economic times and cut back on their spending and learned to live within their means, which she says demonstrates what a fiscally responsible governor she would be. It seems to me that her actions demonstrate just the opposite.
The Haleys didn’t pay their taxes late once or twice, when things were bad; they paid their taxes late in every one of the past five years — not just in 2006, when their income dropped by half, but also in 2005 when it was going up, and in 2007, 2008 and 2009, when it was going up substantially, topping out at nearly $200,000 last year….
… the fact is that part of her strategy was to avoid paying her bills on time, by essentially giving herself a loan from those of us who paid our taxes on time. A bailout if you will, albeit temporary, for the candidate who deplores federal bailouts. And since she failed to pay her taxes on time five years in a row, it raises questions about her stewardship of money….
I questioned Ms. Haley’s campaign several times to make absolutely sure that the Haleys had not somehow managed to get an additional extension, and her spokesman never attempted to give any sort of justification for their missing the extended deadlines. I’m not sure what the repeated delinquent tax filings suggest: Poor organizational skills? Inability to delegate authority — or, if delegated, to choose trustworthy people to whom to delegate? A disregard for the laws the rest of us have to obey? What I am sure of is that if it were me, I wouldn’t be bragging about it.