First, I’ll admit that I got the “ad homo-nem” joke from my elder son, who said that when he saw the same thing I’m reacting to here:

@TreyWalker: Effeminate sounding non-answers by @VincentSheheen on ObamaCare won’t cut it in this cycle. From the Post and Courier: postandcourier.com/news/2010/aug/…

Say what? Effeminate-sounding? And this from one of your more sensible Republicans, Trey Walker, a McMaster and McCain kind of guy…

Here, for the record, is what Yvonne Wenger wrote on that subject:

Sheheen said he has answered questions throughout his campaign about his national policy stances, such as abortion rights.
“My answer is the same: I support life. I have always supported life and my voting reflects that,” he said.
Likewise, Sheheen said he has laid out his position on the new federal health care law, including his concerns about the expense and the burden to small businesses. But the new law has components that will remedy long-standing issues in the country that only a “bitter partisan” would find fault with, such as denying coverage to children with pre-existing conditions.
“I think it’s the next governor’s job to stand up against things that aren’t helpful to South Carolina within the health care law,” he said, adding that he would do just that if elected.
It is unclear where Sheheen stands on the individual mandate that Americans have health insurance and whether he supports the court challenge on the new law by the state Attorney General Henry McMaster, a Republican. Sheheen’s campaign didn’t immediately respond to questions Tuesday on the matter.

On thing that astounds me is that MSM types will actually go along with the Haley strategy of distraction by asking questions about inside-the-Beltway GOP litmus tests of a candidate running for governor of South Carolina. Abortion? Immigration? Obamacare? (This kind of mindlessness — the phenomenon whereby reporters exercise no judgment whatsoever about what matters, slavishly going along with any idiotic topic that gets brought up by either of the two “sides” you’re falling all over yourself to be fair and impartial to, whether it’s relevant or not — is why I gave up news and switched to editorial in 1994. In editorial, you’re allowed to think, and call B.S. “nonsense.” Unfortunately, we still couldn’t call it “B.S.” Not in a family newspaper. Or on a family blog.)

There is no frickin’ way I would expect a governor of SC to have an overall opinion on Obamacare. Hey, I don’t have an opinion on Obamacare (if I did, you’d have read it here). But maybe that’s because I sort of quit paying attention to Obama on health care way back during the primary campaigns back in the Year Seven, when it became clear that he was too timid even to suggest doing what ought to be done. (Seriously, folks, have you seen any effects from this massive health care “reform” yet? Neither have I.) Since that’s my position, I tend to look at these Republicans who keep wetting their pants about their imagined “government takeover of health care” as though they were recent arrivals from Venus. (Which, in case you missed the implication, is an “effeminate” planet. Your more masculine delusionals come from Mars.)

Another thing that astounds me is that Vincent stays cool and doesn’t get totally ticked off about it. I certainly would.

Maybe that — the fact that Vincent stays cool — is what Trey thinks is “effeminate.” Maybe Vincent should take a swing at reporters when they ask stuff like that. Not at Yvonne; that wouldn’t be manly. How about Tim Smith of The Greenville News? He’s the one who always wears the cowboy hat. It’s always manly to hit a guy in a cowboy hat. In fact, I’m pretty sure there’s a codicil in the unwritten Guy Code that if a guy’s wearing a cowboy hat, you’re allowed (and perhaps required) to hit him, whether he’s done anything to provoke you or not. OK, that should be Vincent’s strategy from now on: Whenever anyone in the MSM asks a particularly stupid, irrelevant or irritating question, Vincent should just take a big swing at Tim Smith. After a few times of doing this, the TV cameras would be ready and watching for it, and reporters would be making up stupid questions just to see Vincent pop Tim a good one. The voters would all see this on their boob tubes, and that would lay this “effeminate answers” non-issue to rest for good.

Anyway, I was standing there during the exchange that Yvonne was writing about, which you can see pictured in this image from a previous post (that’s Tim in his cowboy hat, and Yvonne at the left). You can also see Yvonne with me back on Episode 2 of “Pub Politics,” the one entitled “Wesley Sounds Like Crap.” But that’s sort of a digression, isn’t it? Although not nearly as much of a digression as asking candidates for governor of SC about abortion, immigration and national health care policy.

Vincent can stay cool in such absurd moments, because his staff gets all ticked off for him — the way I would. Below, you can see Campaign Manager Trav Robertson intervening to tell the reporters in no uncertain terms to can the stupid, irrelevant questions — and to arrange a time for an extended interview if they want to talk about irrelevancies. Good for you, Trav. Go get ’em… 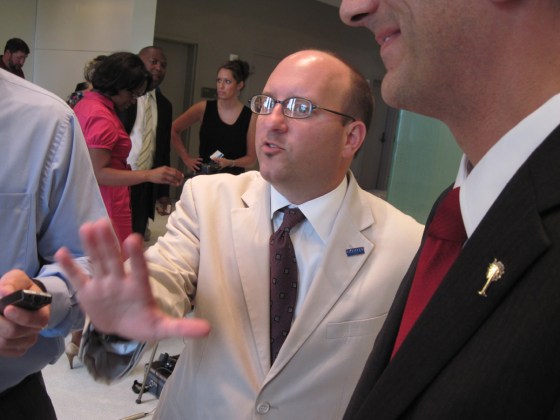