Most interesting item from Twitter today… Aaron Sheinin, formerly of The State (and now of the Atlanta Journal-Constitution) tweeted this at midday:

The song Palin and Handel are coming on stage to:http://youtu.be/WT1LXhgXPWs
about 4 hours ago via TweetDeck

To explain — Sarah Palin was in Jawgia today to campaign for Karen Handel, that state’s former secretary of state, who is in a bitter runoff tomorrow for the GOP nomination for governor. (Yet another case of rather presumptuous people, such as our own Jim DeMint, jetting around the country to play right-wing kingmaker and fragment the Republican Party.) 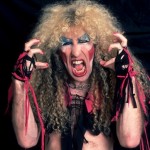 And the two women made their entrance at the event to the strains of “We’re Not Gonna Take It.” Yes, by Twisted Sister. Yes, the self-appointed maven of true, traditional downhome American values was striding out to a theme by a band that, when I was a young Dad back when they first hit the charts, I would have leaped tall buildings in my haste to keep my children from seeing so much as a picture of, so deeply offensive to basic traditional sensibilities (such as my own) I found everything about the band — their name, their look, and (to a lesser extent) their head-banging sound — to be.

By the way, I double-checked with Aaron to make sure I wasn’t misunderstanding, and he responded:

@BradWarthen going on right this second.
about 4 hours ago via TweetDeck in reply to BradWarthen

At this point, I could digress with a discourse on how the grossly childish, hostile, chip-on-shoulder attitude embodied in that song, that whole “grownups aren’t going to tell me what to do” petulant pout, fits PERFECTLY with the worldview of the Tea Party and the other bits and pieces of ex-Gov. Palin’s fan base. Which, I’m sure, is why it was chosen.

To give you a further idea of the mentality the song embraces, another reader responded to Aaron’s observation thusly:

JVTress @asheinin You know who else used that song? The one and only John Rocker.
about 4 hours ago via TweetDeck in reply to asheinin

You know, John Rocker — the former Atlanta Braves closer who was better known for shooting off his mouth and offending people than for putting out rival hitters. You know — the guy most famous for saying this when asked whether he would ever play for the Yankees or the Mets:

I’d retire first. It’s the most hectic, nerve-racking city. Imagine having to take the 7 Train to the ballpark looking like you’re riding through Beirut next to some kid with purple hair, next to some queer with AIDS, right next to some dude who just got out of jail for the fourth time, right next to some 20-year-old mom with four kids. It’s depressing… The biggest thing I don’t like about New York are the foreigners. You can walk an entire block in Times Square and not hear anybody speaking English. Asians and Koreans and Vietnamese and Indians and Russians and Spanish people and everything up there. How the hell did they get in this country?

In other words, “a Real American.”

But bottom line, the thing that gets me is the cultural aspect of the Palin-Twisted Sister connection. You know, I have frequently called down some of my interlocutors here for making like Bristol Palin’s shame is a legitimate topic for political dissection. I don’t hold with attacking folks’ families. But it does occur to me that if mom thinks Twisted Sister is a good place to go for background music, kiddies could grow up a bit confused. (And no, it’s not that I’m square, as we said in my day. I was just into Elvis Costello and Men at Work and the like at that point in musical history. I was never into “let’s twist glam until it’s positively gross.” The closest I came to that was my deep admiration for the work of Spinal Tap.)

Anyway, I’ll say this for the video at least: I love the little homage to “Animal House” in the video, from using the actor (Mark Metcalf) who played “Doug Neidermeyer” to the paraphrase of his most famous line: “What it THAT? A Twisted Sister pin on your UNIFORM?!?!?”

That did make me smile.

15 thoughts on “Irony of the day: Sarah Palin and Twisted Sister”