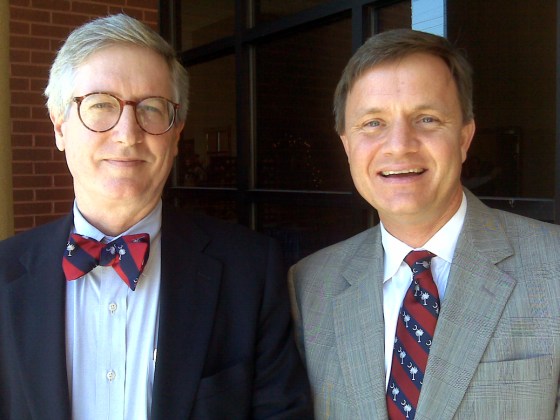 This afternoon at Rotary I found myself seated next to Boyd Summers, Richland County Democratic Party chairman. (Just to be ecumenical and UnParty, I also chatted with Richland County Republican Chairman Eric Davis after the meeting, so there.)

It was noted that he and I were wearing essentially the same tie, although mine was bow and his was not. Sort of a Palmetto variation on the old Brigade of Guards regimental stripe.

Anyway, having arrived way early for the meeting (I rode with Lanier Jones from ADCO, and as an ex-president of the club, he goes early), I had 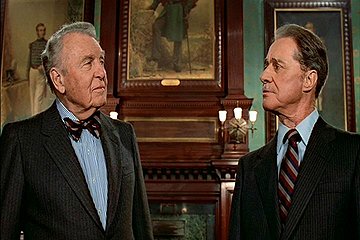 time for a digression. So I noted that we were like the Duke brothers, Randolph and Mortimer. I had to explain that the Duke brothers were the partners in Duke and Duke, the fictional Philadelphia commodities brokers in “Trading Places,” and that in every scene, they were wearing ties made from the same material, only Randolph (you know, Randy, like Randy Jackson of the Jackson five) wore a bow and Mortimer wore the more boring sort of tie.

When I was done with the explanation, John Durst said wow, you really notice detail, don’t you? I allowed as how I did, but that’s not really true. I mean, how could anyone NOT notice something like that — especially when one has seen the flick a certain number of times?

After the meeting, I got John to use my Blackberry to shoot the above photo, to record the moment. Aren’t you glad I did?

By the way, Joe Wilson noted to me that he, too, was wearing a similar tie. I nodded, but I was humoring him. His was like Boyd’s, except silver (as in, “Silver Elephant”) in the places where it should have been dark red. Obviously, Joe misread the memo.